Getting Frightened Rabbit tickets is an ordeal in its own. When they played in London last year, the tickets sold out in the pre-sale. Their show last week was slightly easier to get into since they played in a much larger venue but the insane eBay ticket prices, a gauntlet of touts outside The Forum is evidence that their Stateside popularity has finally made its way to the UK.

We arrive halfway through Washington Irving’s set. It’s hard not to notice immediately that they sound like Mumford and Sons. The music is passionate, folky and intense, with lots of loud jangling guitars. In terms of uniqueness though, it would be difficult not to make comparisons with the giant phenomenon that is Mumford. However, there is always room for similar bands in most markets, especially if they’re as good as Washington Irving.

Next up is Canadian band, Wintersleep, who manage to sound like REM and James at the same time, which is no mean feat. Their vocalist has an unusually captivating voice, which works well with their rather dreamy sound. It’s definitely something I could imagine myself listening to – both soothing and invigorating.

It’s not often that you can declare that a band is playing to a genuinely adoring crowd but there is no question that everyone in The Forum is bristling with excitement that Frightened Rabbit is in front of them in the flesh. With two weeks having past since the release of Pedestrian Verse the eagerness to hear the new material live is obvious and the excitement mirrored by an equally excited band. And they don’t disappoint. The set is well balanced between old favourites and the more anthemic new tracks. Vocalist, Scott Hutchison, charms the crowd with his usual humble, slightly bumbling sweetness, creating an electric atmosphere where everyone dances, claps and sings along at a volume that is almost, but not quite unpleasant. I can only imagine that Frightened Rabbit will get bigger and more people will catch on and that tickets will be even harder to come by but if you do get the chance, go and see them and in the meantime, make sure you download Pedestrian Verse, it’s the kind of album you press repeat on the minute it finishes. 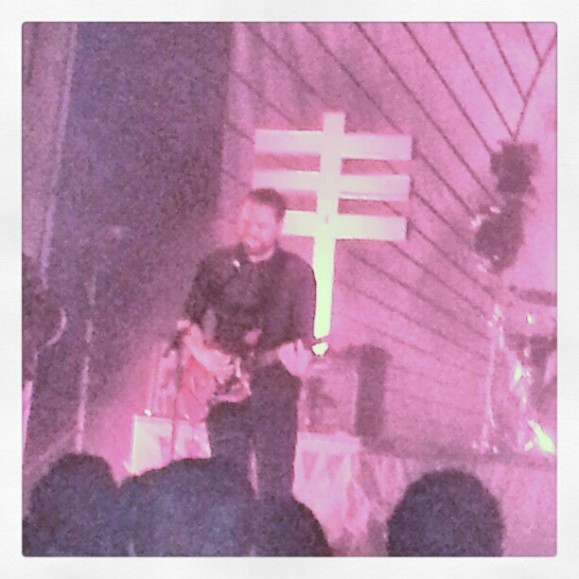