On the day of their fifth wedding anniversary, Nick Dunne (Ben Affleck) returns from the bar he owns with his twin sister, Margo (Carrie Coon) to find his wife, Amy (Rosamund Pike) missing. There are clear signs of a struggle so Nick reports Amy missing and an investigation into the apparent kidnapping commences with Detective Rhonda Boney (Kim Dickens) at the helm. At first Nick is deluged with sympathy but as more evidence is uncovered, alongside Nick’s odd behaviour suspicions, are aroused that he might know more about Amy’s whereabouts than he is letting on. At the same time through Amy’s journal we learn about a marriage in crisis plagued by unsatisfied expectations and the pressures of real life tearing apart a shallow connection between two people both pretending to be something they are not.  My book club read Gone Girl almost two years ago before there were any whisperings of a film and it was a firm favourite so I was definitely looking forward to seeing this. Unfortunately the problem with a story that relies so heavily on a massive twist is that knowing the twist really affects your experience and I am finding it almost impossible to extricate my experience of the novel from the film. It’s hard to know how I would feel about the film if I had gone in blind. What I can tell you is that unlike many others, I thought the casting of Amy and Nick was inspired before I saw the film and that did not change in viewing it. Pike has exactly the kind of icy beauty required to play a woman as calculated, manipulative and distant as Amy and Affleck’s smarmy charm makes it easy to hate and pity Nick simultaneously. All of that said, despite the fact that Gone Girl is two and a half hours long, elements of it feel underdeveloped and I didn’t feel as in tune with the characters’ motivations as I did while reading the novel. Although I enjoyed it, I left wanting more. Would I have felt like that if I hadn’t read the book? Quite potentially not but at this stage I think it’s almost impossible to tell. David Fincher does a solid job of translating the source material to screen but for me, it’s not his best. 3.5/5

When Zach Orfman’s (Dane DeHaan) girlfriend, Beth (Aubrey Plaza) dies, he finds himself lost in a slump of misery, mooching around in black clothes, disconnected from his family and obsessively spending time with Beth’s parents (John C. Reilly and Molly Shannon) despite the fact that their relationship was having troubles before she died. One day he pops in to see Beth’s dad, Maury and spots Beth in the house discovering that she has come back to life. Zach is ecstatic but Beth has no memory of dying, in fact she’s a bit hazy on a lot of details. The more time Zach spends with Aubrey stranger her behaviour and appearance becomes and he starts to suspect that she is a zombie. Now he’ll have to figure out how to break up with her without her killing him in the process, while at the same time keeping out of the way of an ever increasing horde of the undead. To some extent it feels like Life After Beth was a good idea that would have made a fun episode of Buffy but just isn’t a coherent enough concept for a full-length film nor does it pack enough laughs to make you forget just how silly it is. DeHaan is suitably type-cast as quirky, Zach but Plaza spends most of the film doing little more than gurning angrily, which gets tired quite fast. My favourite character ended up being Zach’s trigger happy brother Kyle, played by an always excellent Matthew Gray Gubler. After reading Cinema Parrot Disco’s review I found myself agreeing that there isn’t enough exploration of what Zach and Beth’s relationship was like before she died and that might have been a better use of screen time than dragging out all of Zach’s dead relatives and it would have made the concept of knowing when to let go much clearer as a theme. Points for effort but not the final result. 2.5/5

As a girlfriend, Beth was head and shoulders above the rest

I can’t believe I actually have to try and remember what happened in this idiotic film but anyway… Channing Tatum takes his whiny daughter on a tour off the White House on the same day he is going to have an interview with his ex-girlfriend (Maggie Gyllenhaal) to be in the secret service. That goes tits up because he’s a bit crap with authority. Poor Channers. Then some angry dudes break in and try to kidnap the President (Jamie Foxx) but Channing holds them off and he and Barack… I mean Jamie… have to stop the angry dudes from starting world war three. But it’s not actually the angry dudes in charge… it’s James Woods and he’s supposed to be the President’s best mate! LOUD NOISES! And then everyone thinks the president is dead so a whole bunch of people get to have a go and being president including Richard from Eat Pray Loathe. And there’s an RPG! And Channers saves his daughter and Barack. The end. 1.5/5

Where’s the mothefucking RPG? You said I could fire a RPG?

The Manzini family find themselves in Normandy, renamed as the Blakes, after their latest witness protection programme relocation. Their handler, Robert Stansfield (Tommy Lee Jones), desperately wants them to fit in but old habits die hard and it’s not long before mum, Maggie (Michelle Pfeiffer) is blowing up grocery stores, dad, Fred (Robert De Niro) is exerting unnecessary pressure on the local council to sort out his plumbing, son, Warren (John D’Leo) has several criminal operations on the go at school and daugter, Belle (Dianna Agron) is trying to seduce her maths tutor.  This becomes the least of their problems when a series of ridiculous events leads to mob boss, Fat Willy (Vincent Pastore) finds out where they are. The Family’s biggest problem is that it doesn’t know what kind of film it wants to be and so it ends up as a bizarre mishmash between a thriller and a comedy, neither of which works. De Niro has one great scene where he relays stories of his childhood to the film club he’s been invited to join but other than that this is a waste of a good cast on ill-conceived material. 1.5/5 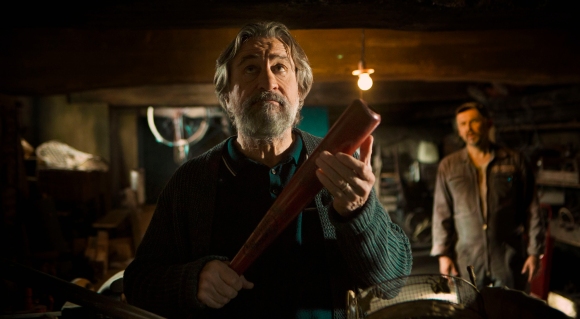 God save me from the terrible direction my career has taken