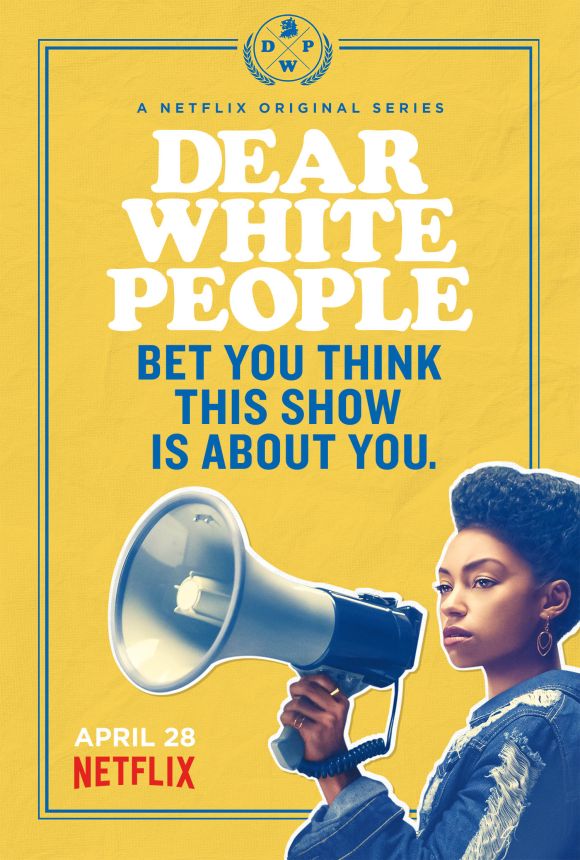 Set at a fictional Ivy League college called Winchester, Dear White People, takes the film of the same name and turns it into a series exploring the lives of a handful of its Black and Biracial students.

At the heart of this is film student, Sam (Logan Browning), a passionate Black rights activist who hosts a radio show called Dear White People. In her show Sam highlights the struggles faced by the Black students on campus as they try to navigate the complex race relations at play not only in this environment but in the wider world.

Things come to a head after a student magazine called Pastiche hosts a Blackface party on campus, which both exposes prejudice and inequality at Winchester and divisions between the factions in its Black Caucus.

But who actually sent out the invitations to the party and what secrets is Sam hiding in her love life?

I really enjoyed this snappy series. I found it to be thought-provoking, funny and informative and once I started watching I couldn’t stop. There were so many interesting and topical themes at play and it really brought to light the additional complexities that Black people have to deal with in everyday life on top of just trying to get through things. Some of the topics explored include trying to work within a system that ultimately doesn’t value you, group versus personal goals, safe spaces versus integration, intersectionality – especially with regards to sexuality and structures of power.

Browning is exceptional, capturing Sam’s righteous passion, her whip smart intelligence and her vulnerability. She is ably supported by a cast that includes both friends and antagonists. I particularly enjoyed DeRon Horton as introverted gay journalist, Lionel and Brandon P. Bell playing Troy Fairbanks, a young man caught between his own identity and the one his father has created for him.

Part of the wry humour is created by Giancarlo Esposito who provides darkly humorous narration to each episode, which is told from the perspective of a different character.

If you have any interest in identity politics or modern race relations in the USA this is a great watch and I would highly recommend it.