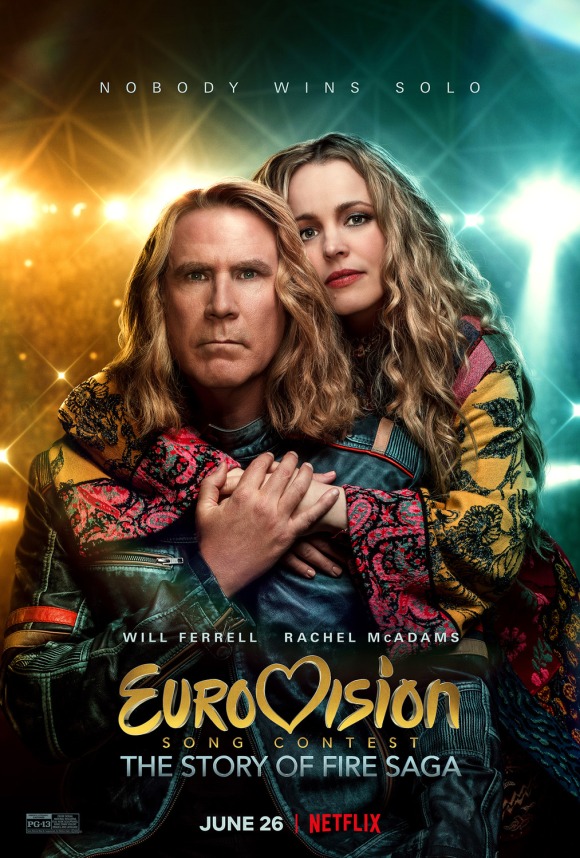 I love Eurovision. I know it is absolute silly trash but that is why I love it. It’s simultaneously ridiculous and awesome and camp and over the top and I live for it. I guess it’s the same reason I live for Drag. This year because of Coronavirus there was no Eurovision Song Contest and hence I was sad. Roll on Eurovision Song Contest: The Story of Fire Saga, there to fill the gap for everyone who missed out on seeing Moldovans in crazy hats singing about cheese while glitter canons went off this May.

Icelandic singer, Lars Erickssong (Will Ferrell) has only ever had one dream, to win the Eurovision Song Contest. His best friend, Sigrit Ericksdóttir (Rachel McAdams) has only ever dreamed of being with Lars so she’s along for the ride. Unfortunately in their remote fishing town of Húsavík, “Fire Saga” is a bit of a joke and Lars’ father (Pierce Brosnan) thinks he’s a complete embarrassment.

When a series of unfortunate events and possibly some praying to the elves come together, Fire Saga end up becoming Iceland’s official Eurovision entry. Finally Lars will have his chance to win the prize he’s always dreamed of and Sigrid might get Lars to notice she’s in love with him. The problem is Lars is so single-minded he’s his own worst enemy.

So this film is way too long and it’s very silly and big parts of it make no sense. For example… the previous winner is Sweden but the contest is in Edinburgh and the presenters are not Scottish. Will Ferrell probably needs to come to terms with the fact that he can’t play the lead in every one of his films and there is a limit to the number of penis jokes you can get into one script. I think it would have made a difference if he’d have stayed in the director’s seat and and let someone younger play Lars.

All of that said… it’s very funny. Mr O and I were crying with laughter at several scenes. It’s also a real love letter to Eurovision. It gets Eurovision. So if you love Eurovision you’ll get the same feelings from it. McAdams is charming and proves that she has great comic timing. Sigrid is a sweet, gentle hippy with a strong moral core as well as bit of a cheeky side and she’s the heart of the film. I also thought Dan Steven’s playing Russian contestant, Alexander Lemtov was a hoot. He really embraces this extremely over the top character and I loved it.

If nothing else the music is brilliant. The songs that Fire Saga actually perform at Eurovision are catchy, silly and grandiose enough that they’d be totally at home as part of the real thing. There’s one incredible scene where all the contestants are at a party and a sort of karaoke “jam” ensues. I am not a fan of musicals so it wouldn’t normally be my kind of thing but I was so into it that I’ve rewatched it several times on YouTube. And finally if you don’t get the rather suggestive Ja Ja, Ding Dong! stuck in your head after watching this, there’s no hope for you.

If you’re craving something silly in the very serious times we’re currently facing, this movie could just hit the spot.