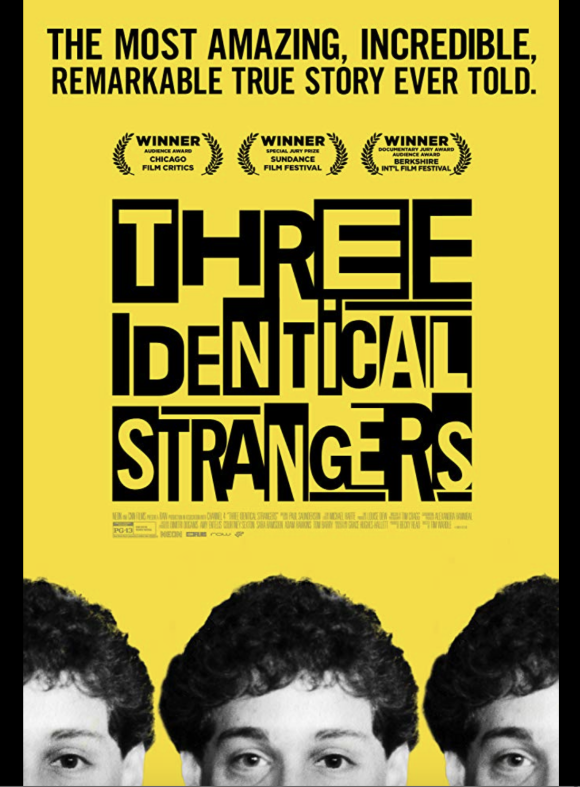 In 1980 three young New Yorkers discovered that they had all been separately adopted as infants and were in fact a triplet. At first Robert, Eddie and David’s discovery of each other is a blast. They go on all the talk shows, they revel in their similarities and use their newfound fame to indulge in a life of wine, women and song.

It’s not long before they start to wonder about their origins and why they were separated. As the three delve deeper into the past they uncover a series of dark secrets that will shock them to their cores and lead to tragedy.

I love a good documentary and some real life intrigue so this was right up my street. It also takes a really intelligent approach to make this kind of story work and I loved how the filmmakers came at this.

It starts off as just a miraculous story full of the joy of these three lively, handsome boys finding each other. It’s told from the perspective of two of the three triplets and their friends and family members and it carries you along in this wave of happiness. Then you start to wonder why they haven’t spoken to the third brother…

And then slowly more and more snippets of information are revealed and the shock starts to set in and then it just grows and grows into what for me was a visceral horror. By the end I wondered if it would have been better if the triplets had never found each other at all.

I don’t want to reveal any more of what is uncovered because a lot of the power of this story is not knowing what is going to happen next.

If you like unsettling true stories about identity, humanity and how we become the people we are, this should tick all the boxes but be warned that it might leave you feeling rather sad.