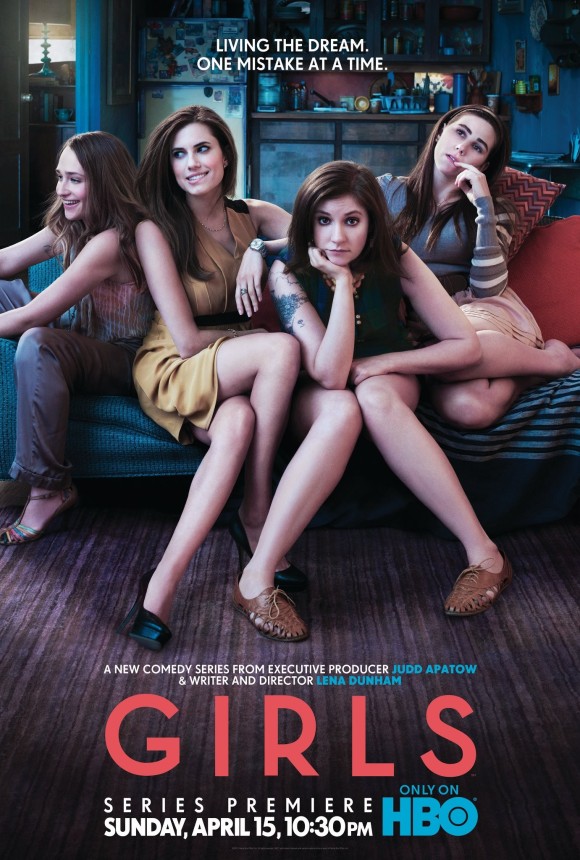 Girls follows the trials and tribulations of four twenty-something friends as they try to survive life in New York. Hannah (Lena Dunham) is a neurotic, aspiring writer who overthinks every element of her life. Marnie (Allison Williams) is Hannah’s best friend and roommate who spends all her energy trying to curate her perfect life. Jessa (Jemima Kirke) is a long time friend of Hannah’s who has recently returned from her travels or rehab… or both. And Soshanna (Zosia Mamet) is Jessa’s naive, virginal cousin.

As the four try to navigate friendships, love, work and figuring out who they are and what they want they go on various adventures of discovery that are amusing, disturbing and often infuriating.

Initially Girls was touted as a new version of Sex in the City but it’s nothing like Sex and the City. While the characters in SATC were polished and experienced and always there for each other, the Girls characters are anything but. They’re messy, confused and often utterly horrible to each other. Some of this might be because essentially they’re all narcissists.

I’m doing a terrible job of selling this show and in fairness I think a lot of people will hate it. Most of the characters are dickheads most of the time. Their problems are largely manufactured as they’ve come from places of high privilege and their behaviour can be a lot to take on.

I, on the other hand, am on my third watch because there are moments of absolute hilarity. Soshanna smoking crack and running around the streets in her pants before kneeing Ray (Alex Karpovsky) in the balls slays me every time. As does, Marnie’s boyfriend Charlie (Christopher Abbott) dumping her onstage while reading excerpts from Hannah’s diary.

I also find beauty in the sheer nonsensical worries of the characters as it reminds me of my own early twenties many thousands of years ago. It’s like watching the live implosion of a generation dealing with the fact that their dreams probably aren’t going to come true and they better just get on with it. I like the sheer rawness of it and how willing Dunham is to expose herself, both physically and emotionally to tell the story she wants to tell. And finally it’s the show where I first discovered and fell in love with Adam Driver, who plays Hannah’s obsession turned boyfriend, Adam. He is the best thing about the show.

So there you go… you will probably hate Girls, there are multiple arguments for why it is terrible but I love it and will be making my way through all six seasons… yet again.