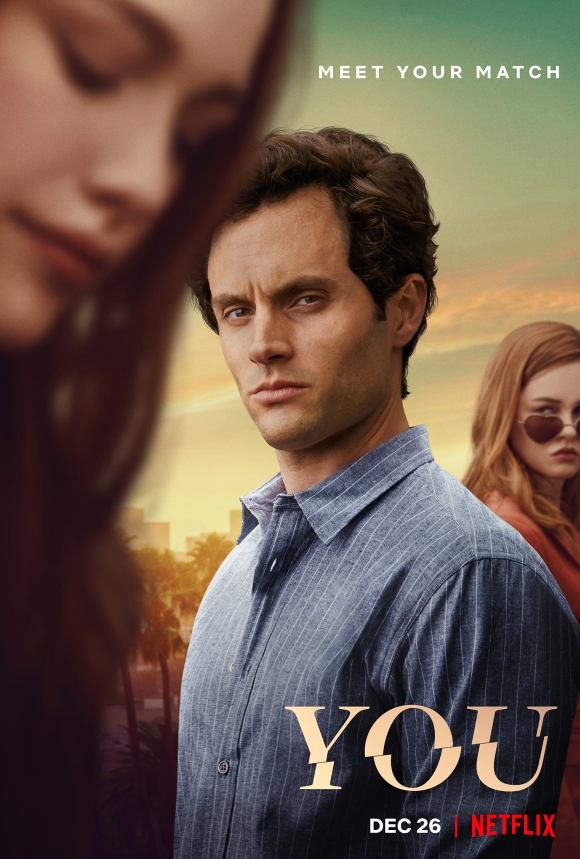 Following the reappearance of Candace (Ambyr Childers) and her promise to get revenge, Joe (Penn Badgley) has no choice but to leave New York and start again. He heads off to Los Angeles, which he imagines is the last place anyone would look, as it’s literally his worst nightmare.

It’s not long before he meets Love (Victoria Pedretti), a widowed chef who is most definitely the love of his life. Things are never easy for Joe though. He needs a new identity, Love has a co-dependent addict twin brother called Forty (James Scully) who rarely lets her out of his sight and Joe can’t resist meddling in the affairs of his neighbours, sisters Delilah (Carmela Zumbado) and Ellie (Jenna Ortega).

Soon the lies are deep, the bodies are piling up and Joe’s past is knocking at his door.

To some extent the second season of You is much of the same as the first one. Although Joe claims to have turned over a new leaf, he’s just as obsessed, he’s using all his old methods and he’s lying to himself just as much as those around him.

This time we get an insight into Joe’s past and his relationship with his parents which starts to paint a picture of why he might be the way he is. There is also a suggestion that he is becoming somewhat more self-aware and questioning of his own motivations as the series continues. Both of these elements add depth and provide some differentiation from the first season.

There’s less reliance on the IM pop-ups and social media stalking but again Joe’s voiceover is used extremely well and adds to the narrative that is playing in his head as he plans his next obsessive move.

I know there are fans of the show that think of Joe as a bit of a heartthrob. Personally he gives me the heeb but Badgley is so good at playing both the devoted boyfriend and the predator that you can sort of understand why some might be sucked in… I mean that’s the point of the show, right? Pedretti provides a great foil in the seemingly brutally honest, intense Love and Scully does well to walk a fine line between being annoying and so damaged you want to save him. Ortega does the best she can with Ellie but the character isn’t always written very well and can come across as caricaturish. In the end I think my favourite character was actually Will Betelheim (Robin Lord Taylor) who provides a sort of listening post/pseudo-therapist to Joe. I was so interested in his past but unfortunately we barely get to find out anything about him. I couldn’t stand Candace and I am not sure what the show is trying to do with her. I can’t tell if she’s supposed to be sympathetic because Joe has ruined her lifem or if we’re supposed to find her methods of attempting to get her revenge just as off putting as Joe’s behaviour. Either way I wanted her off the screen the minute she was on it every time.

You is bingeworthy and the kind of thing that gets you ploughing through the episodes to find out what is going to happen next and it’s very well made. It’s not that deep though so it’s more of a time filler than being super memorable.