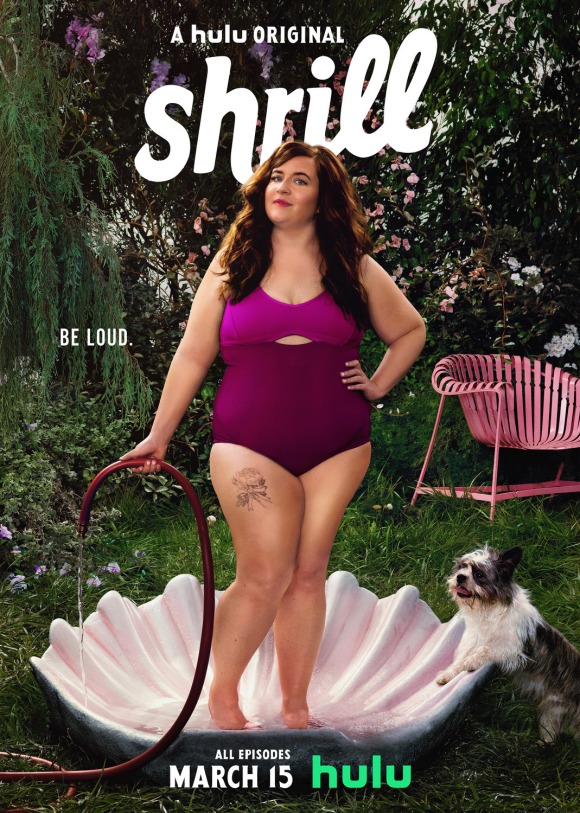 Overweight Annie Easton (Aidy Bryant) is an aspiring journalist who works at a Buzzfeed-style online journal owned and managed by, Gabe Parrish (John Cameron Mitchell). She lives with her best friend, lesbian Fran (Lolly Adefope) and spends too much of her time sneaking out of the back of her sort of boyfriend, Ryan’s (Luka Jones) house.

As Annie starts a journey of personal growth she’ll have to make her way through her own self-limiting beliefs as well as the fatphobic narrative that surrounds her.

Shrill only has six episodes of about twenty minutes long so it’s easy to binge, and binge it I did. It was recommended to me by a friend and I fell for it hook like and sinker.

Aidy Bryant is wonderfully lovable and identifiable to anyone who has ever felt a bit left out of the normal ideals of feminine beauty – especially anyone who has ever been plus sized or to any women struggling to make her voice heard. Her confused relationship with her loving but critical mother (Julia Stern) is so on point as is her fear at losing her unwell father (Daniel Stern).

I adored the off-the-wall Fran and half wanted to be her, half have her as my own best friend. While the character is wild and silly she is also unwilling to suffer fools and excellent at holding the people around her to account.

The relationship between Annie and man-baby Ryan infuriated me in a good way. I wanted to strangle him at least once an episode but Annie’s unwillingness to let even someone so useless go is just a demonstration of how she views herself. And how unable she is to embrace just how interesting and sexy and worthy of love she is.

I think what I loved most was the Annie’s journey was powerful but largely unresolved. Although she made huge inroads into connecting to a more empowered version of herself, many aspects of her life remained broken or became broken. And the selfishness that focusing on her journey uncovered kept things real.

Some of the ideas are a little underdeveloped and some of the characters (for example, Gabe) felt a bit caricaturish but overall it was funny, touching and empowering. Highly recommended!