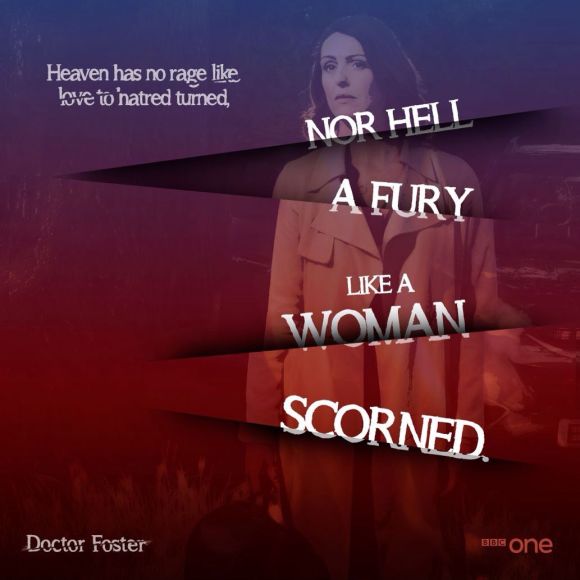 Dr Gemma Foster (Suranne Jones) has a seemingly perfect life. She’s happily married to successful property developer, Simon (Bertie Carvel), she’s the head doctor at her medical practice, she has a good relationship with her son, Tom (Tom Taylor) and a bustling social life. But when she finds a blonde hair on Simon’s scarf she starts to suspect he may be cheating on her and the whole foundation her life is built on starts to crumble.

This series is absolutely Suranne Jones’ show. Dr Foster is a fascinating character and Jones balances her frenetic intensity and calculated calm perfectly. While there is no question that Simon has betrayed Gemma with the help of some of their shared family and friends, Gemma’s reaction suggests that much of her own stability is a facade.

As more and more of Simon’s deception is revealed, Gemma finds herself fluctuating between ruthless manipulation and uncontrolled outbursts, which makes for a claustrophobic and somewhat uncomfortable viewing… in a good way.

Throughout this series I wondered who I was supposed to be siding with or rooting for and I soon realised it was no one. Everyone in this show is self-centred, deceitful and fake but also oddly relateable. It’s one of those shows where you watch for the incredible performances and the car-crash unfolding and just feel utterly relieved that it’s not your life. I genuinely watched this with my hand over my mouth for most of it.

The dinner party in the final episode is absolutely masterful and should be used for acting, writing and directing classes. I felt more anxious watching that than a lot of horror movies.

I think the message was that you can never really know anyone, normality is just a facade we all put up to keep society operational and when someone catches you out in a lie… stop digging and just fess up!

I can’t wait to start watching season 2 to find out what Gemma does next.