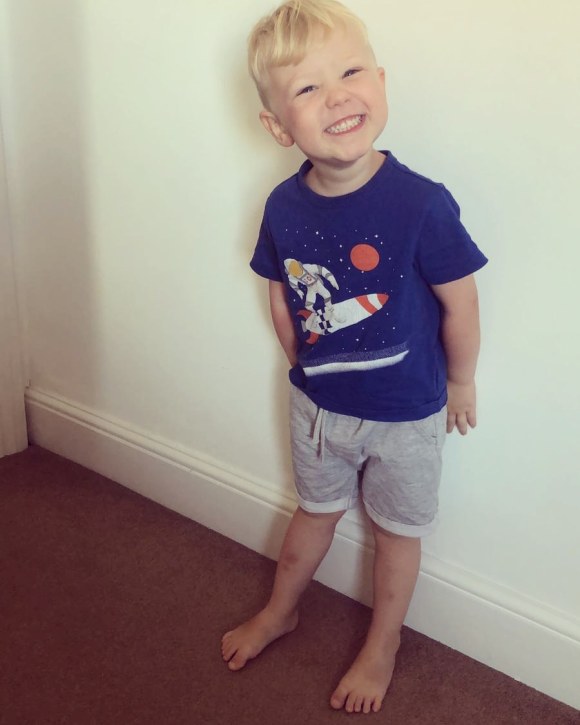 It’s been six months since we last checked in on Little O, so let’s see how he’s doing.

Little O now sleeps through the night more often than not and has started going to bed a bit later and getting up later. We’ve had wake-ups post 8am, which is something I never imagined possible. It has been a bit of an adjustment though as we got rather used to having our evening and getting him out the door for nursery early. Overall it has been a real improvement.

We have now night-weaned so no breastfeeding in the night but he still likes a “babboo” to go to bed and doesn’t even want to talk about the idea of complete weaning. So for now we still have our five minutes of boob daily.

One of our biggest challenges over the last year has been around Little O’s very strong opinions about the most random things. It has taken a monumental effort to get him to agree to wear long trousers. No matter how cold it is, given the choice he would rather wear shorts. Even when he does agree to trousers, he usually insists on shorts underneath. Apparently winter is a myth.

In September Little O moved up to the last class of nursery, where he is now preparing for school. He also started attending nursery three full days a week as Mr O has returned to work full time as a Learning Support Assistant. The other two days a week he spends with Mrs O Senior and sometimes Mr O Senior as he is in the process of retiring. This means they often go on a Friday outing. So far Little O’s favourite has been The Gruffalo trail.

As Little O will be four next year another big theme of the last six months has been choosing a school. I went to see a series of schools before making an application. Our first choice is our priority catchment school as it struck me as having the perfect balance of play and learning. It’s also helpfully right behind the school where Mr O works. We’ll find out in April which school has offered us a place.

Little O is more agile and active than ever and has become a force to be reckoned with on his scooter. He is lightning fast and I am often running behind him playing catch up and begging him to slow down and look where he is going, He is forever climbing on everything and nearly giving me heart failure.

My favourite thing about the last six months has been seeing Little O develop a really close relationship with his friend, Shaya, who he refers to as his “wife”. The two of them are inseparable and ask to see each other constantly. Whenever they are together they spend all their time cuddling and their bond is so lovely to watch.

We do have our moments with mischievous behaviour, kicking off, impatience and endless questions but for the most part Little O is a lovely child who is a pleasure to be around. He is sweet, affectionate, kind and funny and I feel lucky to be his mum. Now I just wish he would eat more than four things.