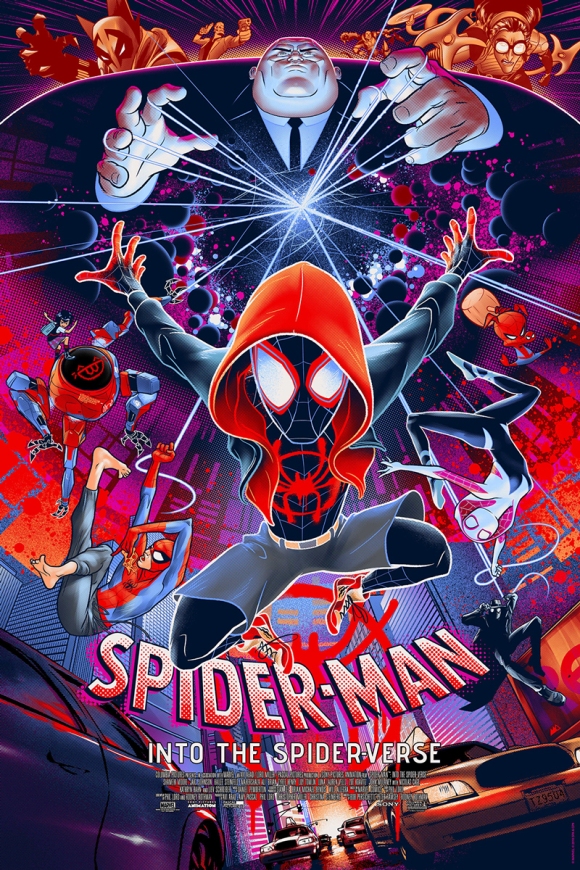 New York teenager Miles Morales’ (voiced by Shameik Moore) parents want the best for him so they’ve sent him to a private boarding school. He’s not having the best time fitting in so he seeks out his uncle Aaron (Mahershala Ali) who takes him underground to do some therapeutic spray painting. It is here where Miles is bitten by a radioactive spider, after which he experiences strange and uncontrollable new abilities.

He decides to track down the spider and comes across a Super-Collider created by Kingpin (voiced by Liev Schreiber) who wants to open the borders between dimensions to reconnect with his late wife and son. Of course Spider-Man is trying to stop this from happening. When he is unsuccessful he uses his last moments to hand over the USB stick that can shut the Collider down to Miles.

This leads Miles to Peter B. Parker (voiced by Jake Johnson) a Spider-Man from another dimension, whose life has gone… a bit wrong. And he’s not the only Spider-Man about. The mashing together of universes means that there are several Spider… creatures… that will need to band together to shut down the Collider before it destroys New York.

I am not sure I have done the best job of describing the plot of this film because it is rather complicated. Not difficult to follow… but there’s a lot going on. The actual story line isn’t that important though as it’s really just a vehicle for the loveable Miles to find himself and for Peter B. Parker to find some hope and belief in himself again. The interactions between the two of them are funny and heartwarming and really play into the idea that Spider-Man is a bit of a geek at heart.

It’s also a vehicle for a lot of humour and banter as the different Spideys cross paths and work together. I particularly liked Peter Porker (voiced by John Mulaney) who is a cartoon pig Spider-Man, known as Spider-Ham.

This animated outing of the Spider-Man universe really brings the comic element to life and it looks absolutely amazing. It has a great soundtrack and excellent voice performances and definitely appeal for all ages. I watched this with Mr O, my friend, her eleven year old and Little O and everyone enjoyed it.

I still feel like I have superhero fatigue but if you are going to delve into the genre and are looking for a really fun film, this is the one worth watching.