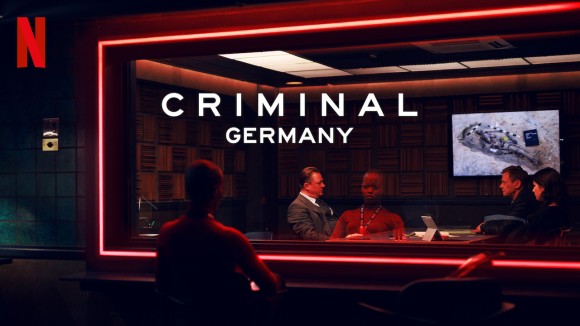 The Teutonic installment of Criminal is another completely different take on interrogation. Again it is set in the same office but with a darker, greyer atmosphere and with significantly less interpersonal shenanigans between the detectives. The German crimes involve a missing real estate developer whose body is discovered years after he vanished, a case of domestic violence and the search for the body of a missing girl.

Leading the interrogation team is Sylvester Groth (Karl Schultz), a hardened, ageing detective who sticks to his tried and true methods. He is being observed by pregnant Nadine Keller (Eva Meckbach) who has been sent to report back on process and procedure and who he obviously isn’t thrilled to have around.

There were a few rather interesting things about the German version. The first was how many important conversations happened outside the interrogation room in front of the now ubiquitous vending machine. The second was that it appears in German law a solicitor can answer for his or her client. The last was how much the characters were impacted by their experiences of growing up in either East or West Germany. In many ways we think of the Berlin Wall having come down a long time ago, but it’s not even 30 years and some rifts are unhealed.

I wasn’t that taken in by the first two cases but the third one was an absolute corker mostly because of the incredible performance of Nina Hoss as Claudia Hartmann. Claudia was the companion of a serial killer who raped and murdered multiple teenage girls with her help. Now with one of the victim’s mothers at death’s door Groth is desperate to get Claudia to give up the location of her body. She isn’t giving up much though and it might take a woman’s touch from Keller to get under her skin. I was absolutely glued to the screen watching the game of cat and mouse between Claudia and Keller and trying to understand Claudia’s motivations.

Almost as good as the UK one but not quite there.