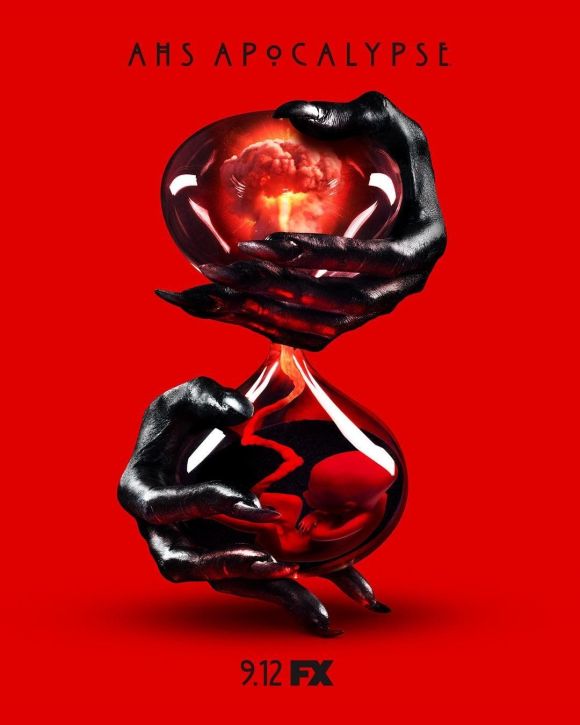 After my American Horror Story binge earlier this year, I was excited to see the eighth season appear on Netflix. I was lucky/unlucky to catch a horrible cold that put me at home in bed for couple of days so I managed to fly through the whole season within a couple of days.

This season focuses on the apocalypse. On the verge of a nuclear fallout a group of people is gathered together in a survivors’ outpost. Some have bought their way in, some have been specifically chosen for their DNA but none truly know the motives of the mysterious “Cooperative” running the show.

As supplies run low and havoc reigns outside the gates the arrival of a stranger raises more questions than answers and the series goes back in time to unpick the causes of the end of days.

As with all previous seasons, Apocalypse is bonkers. It is completely full of weird things and weird concepts, which is one of its major draw cards… well for me any way. While American Horror Story always tells a macabre story, it also always has strong themes and an underlying message. In this case it looks at the vacuousness of modern society, the desire that some people seem to have just to watch the world burn and the fact that human beings don’t really need an Antichrist to end the world… we are shitty enough on our own.

As much as I loved having the witches back, trying to tie up Apocalypse’s timeline with Coven, Hotel and Murder House is ambitious and it doesn’t really work. There are so many twists and turns in logic that it is hard to keep track of what is happening. It also means that some actors are playing 3 or 4 roles. The performances are excellent but it’s jarring and confusing. Ultimately it is not a coherent story and it relies too much on magic and cameos at the expense of the blistering social commentary that usually underpins it. I am not sue if you’d have any idea what was going on if you’d not seen these previous seasons. I felt like I needed to go and re-watch Coven and Murder House as I even I got lost.

Once again Sarah Paulson is outstanding and Billie Lourd proves herself to be a new MVP. I was less sold on Cody Fern as Michael Langdon though.

For me, it’s one of my least favourite seasons but still watchable and addictive and just darkly comedic enough to make it worthwhile.