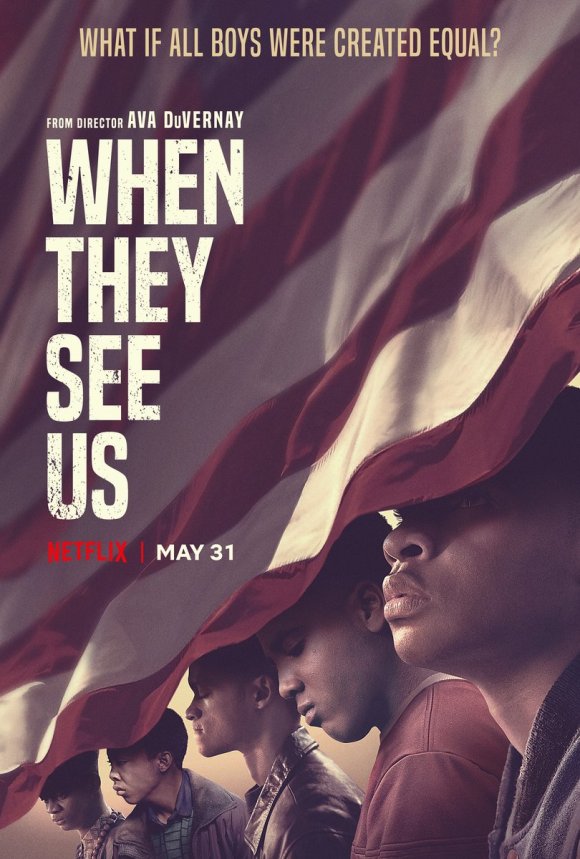 When They See Us is a dramatisation of the true story of five teenage boys of colour who were falsely convicted of the brutal rape of a jogger in Central Park.

Following the horrendous attack Kevin Richardson (Asante Blackk/ Justin Cunningham), Antron McCray (Caleel Harris/Jovan Adeppo), Yusef Salaam (Ethan Herisse/Chris Chalke) and Korey Wise (Jharrel Jerome) were rounded up and questioned relentlessly until they confessed to the crime. Although there was no physical evidence and the timeline did not align, the confessions stood and all four young men spent time in prison.

The series explores the incredible negligence on the part of the New York “justice” department, not only in arresting the boys but also in the way that they were questioned, the choice to prosecute them and their time spent incarcerated. Their experience of time in prison and the after effects is split into that of the three younger boys who started their time together in juvenile detention and Korey who went straight to adult prison at sixteen.

It is as much a story of injustice and redemption as it is an education piece. Through sharing the experiences of the now exonerated five, writer/director, Ava DuVernay takes the opportunity to show what the experience of the US Justice system is like for people of colour and those who don’t have the privilege of realising what their rights are. The boys are questioned without their parents and without representation and manipulated and lied to throughout the process of their interrogation and prosecution in a way that takes advantage of their situation. It also shows how limiting life after incarceration is and how the system is not designed for rehabilitation but for reincarceration for profit.

At the same time it is an examination of what happens to individuals, families and communities in the face of injustice and the horror of having to live out a punishment you do not deserve. This especially obvious in seeing the effect on Antron’s father, Bobby (Michael K Williams) who is an ex-con himself. His own experiences and fears cause him to make an irreversible decision that rips his family apart.

All the performances are outstanding but none more so than Jharrel Jerome, who absolutely embodies the very unique Korey Wise. Korey’s story is the hardest to watch and the trauma he suffers at the hands not only of other prisoners but also the guards is palpable. It is truly exceptional to watch and worthy of any and every accolade possible.

When They See Us is a must-watch but be prepared for tears, burning outrage and revulsion. I can also highly recommend the Oprah Winfrey special where the actual Exonerated Five and the actors that play them are interviewed.