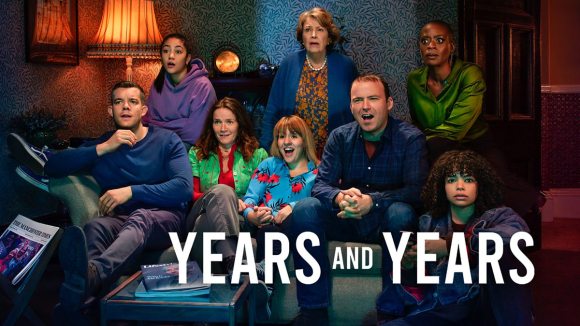 Years and Years follows the trials and tribulations of the multi-generational British Lyons family over 15 years, commencing on New Years’ Eve in 2019. As technology, politics and society changes around the family, so do the family members and the bonds between them.

Years and Years is a fairly simple concept so to be successful everything has to be be done just right. You have to make the technological advances familiar, yet futuristic. You have to ensure that the political and societal calamities that ensue are horrific, yet believable. And most of all you need to build characters and relationships that are authentic, affecting and engrossing.

Writer Russell T. Davis does all of these things, proving once again that he is one of the leading creative talents in Britain. Absolutely everything about the show just works.

The technology starts off with elements we are all familiar with – an intelligent speaker called “Signor” that is reminiscent of Alexa or Siri, mobile phones and rudimentary virtual reality. As the years pass things move on in small increments that seem totally real – live face filters, bodily integration with technology and AI bots taking care of any tasks than can be automated. These advances are presented in a very balanced way with some having a very positive impact, particularly health related and others being much more worrying. They are interwoven into every aspect of life, for example, Rosie’s (Ruth Madeley) son, Lee (Callum Woodford) is always plugged into a device. The technological divide between the generations is also obvious with Stephen (Rory Kinnear) and his wife, Celeste (T’Nia Miller) baffled by their daughter , Bethany’s (Lydia West) desire to become “transhuman”.

On the societal side Years and Years is very much a cautionary tale of allowing right wing populism to run riot. Looming large throughout is the spectre of Vivian Rook (Emma Thompson), a kind of female Nigel Farage, who has that kind of “straight-talking, one of us” appeal. Viv says literally whatever she thinks people want to hear with zero idea of how she’d back it up because getting voted in at all costs is the only goal. Slowly but surely the kinds of things we are horrified by but then quickly forget because they don’t immediately impact us spread through the country. There is a new banking crisis, immigration law goes beyond the point of being Draconian, parts of the country are ghettoised, employment law is completely replaced by the gig economy. The characters most impacted by this are Danny (Russell Tovey) and his Ukrainian refugee partner, Viktor (Maxim Baldry).

On top of all this is the characters and their relationships. They are held together by imposing matriarch, Muriel (Anne Reid) who both nurtures her family and drives them slowly batty. She is the connective tissue between the five very different siblings and their offspring and often the voice of reason and steadying influence. Reid is spectactular, as is Tovey and Jessica Hynes, who plays the rebellious eldest sister, Edith. Every character is flawed and broken but ultimately driven by love and a desire to keep their family together.

It wasn’t perfect. It was a bit of a stretch to believe that the elderly, Muriel, was still that fit and healthy fifteen years after the start of the series. There also wasn’t really any effort made to age the characters. Possibly in the next fifteen years we’re going to supercharge the fuck out of moisturiser… but I am still not sure you can have the same actress playing a character from twelve to twenty-seven without even changing her haircut. I am also not totally sure I bought the final ending’s tech advancement. It was a step too far in the time frame available.

Overall I loved this mini-series. You get a lot of bang for just six episodes and it sticks with you long after the final credits have rolled. A must watch in my book.