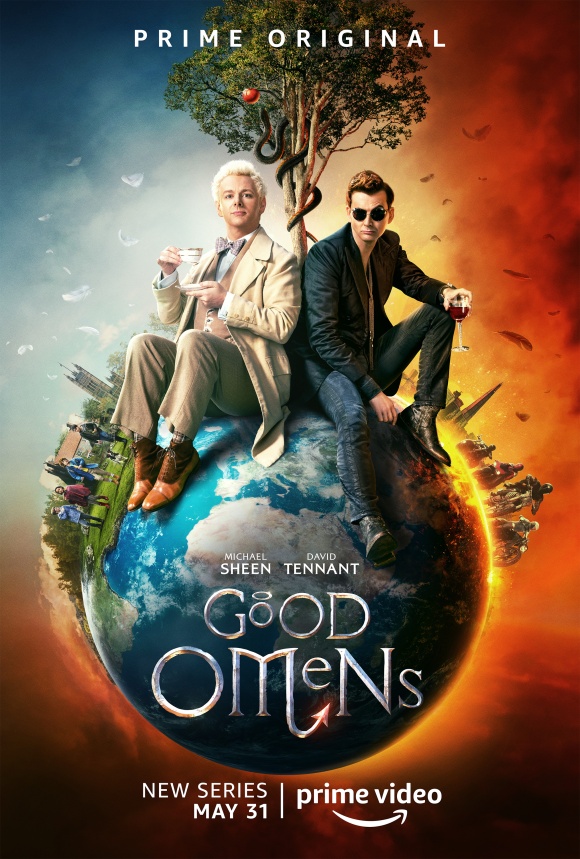 Angel, Aziraphale (Michael Sheen) and demon, Crowley (David Tennant) have been quietly co-operating for millennia. They’ve both become rather fond of earth-life and humans and the bureaucracy of both of their higher powers has enabled them to fly under the radar and enjoy life.

It’s unsurprising that they’re not best pleased to discover that the final battle between heaven and hell, resulting in Armageddon, is imminent. The two decide they must band together to prevent the end of days at all costs, before either side gets wind of their plans. But they’re not the only ones, Anathema Device (Adria Arjona), descendent of Agnes Nutter… a witch who made a series of accurate but bizarre prophesies has arrived to fulfil her destiny. And what if the Antichrist, eleven year old Adam Young (Sam Taylor Buck) doesn’t even want to rule the world anyway?

This Prime Original mini-series is based on the novel of the same name by legendary fantasy authors, Neil Gaiman and Terry Pratchett. I enjoyed the novel when I read it but I never bought into its enormous hype. My feelings on the TV series are very much the same.

Don’t get me wrong, the premise excellent. The idea that pure good and pure evil are actually impossible and that all things in the universe are ultimately balanced is very attractive. And heaven and hell represented as monolith bureaucracies focused on policy and procedure rather than outcomes is so relatable.

The production value is outstanding and both Sheen and Tennant were made to play their roles. There is some great support from Anna Maxwell and Ned Dennehy as demons, Beelzebub and Hastur and John Hamm makes a perfect Archangel, Gabriel. I was less sold on Arjona, and the childhood actors tend towards the side of annoying.

Like with the novel, if you sit back and enjoy the bonkers ride and all the cleverness and the banter between the prissy Aziraphale and the rockstar like, Crowley you’ll love it. It is truly a bromance/possible romance for the ages. My problem is that I am a bit of an over thinker and I started wondering why the various supernatural elements sometimes performed miracles to get the outcomes they wanted and were bound by the laws of physics at other times. I kept getting distracted by my own brain, which for me means a show just isn’t immersive enough for me not to care about some of the holes.

I think I am in the minority though as most viewers seem to have loved every second of it. I liked it… I just didn’t love it.