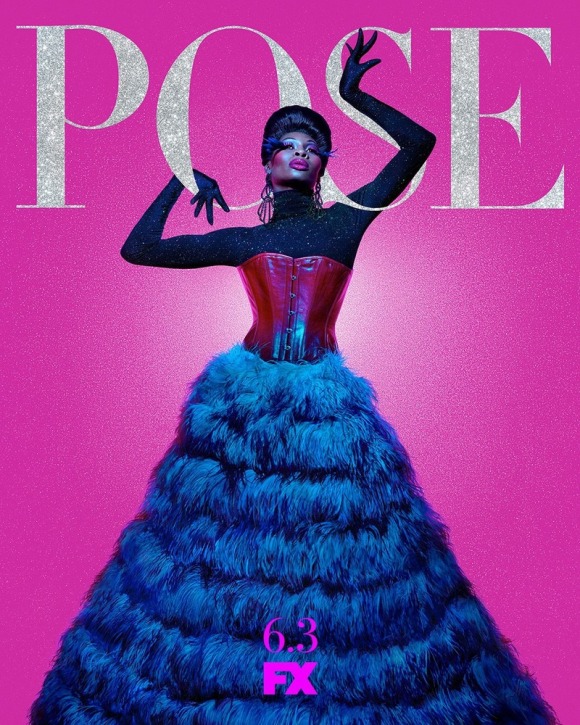 I am a huge fan of RuPaul’s Drag Race. I love the artistry of the participants as well as their boundless self-expression and the way they interpret the weekly runway categories in such a creative fashion. The show is the epitome of fierceness and I am living for it.

My love of Drag Race lead me to the documentary Paris is Burning which looks at underground “ball” scene that formed a huge part of the New York LGBT community in the 80’s. I have watched this documentary several times because it is beautiful and heartbreaking and gives such a deeper understanding of the inspiration behind the TV show.

Pose is set in the world of Paris is Burning so you can imagine I was like a moth to a flame.

In a New York ballroom dominated by the House of Abundance, star performer, Blanca (Mj Rodriguez) dares to break away from house mother Elektra (Dominique Jackson) to start her own house. Blanca’s first adopted child is Damon (Ryan Jamal Swain), a talented dancer disowned by his family because of his sexuality. She is joined by former House of Abundance daughter, Angel (Indya Moore) and the House of Evangelista is born.

Blanca tries to navigate the cut throat ballroom world, while building her house and providing love and support to her “children” and the family she has built for herself. Elektra strives to achieve the on thing she has always wanted, a complete sex change, even if it costs her her relationship and security. Angel is wooed by Stan (Evan Peters), a married exec who works for Donald Trump. And Damon tries to find the balance between dance school and the excitement of the ballroom scene.

All of the glamour and the bitchiness have a backdrop of the horrible reality of the growing AIDS epidemic that is tearing the community apart.

The show has some really strong themes – self acceptance, the true meaning of family, appearance versus reality and of building a future in world that doesn’t want you.

There is a lot of glitz and glamour and some utterly epic “reads” mostly from Elektra who hides her vulnerability behind an icily impenetrable wall of class and bitchiness. What makes the show special is the performances though. Every actor brings so much heart to their character. I think this comes from the fact that they have been through what they are portraying. By casting transgender actresses Pose ensures an authenticity that makes it really special. For me the stand out performance comes from Billy Porter, who plays the ballroom compere, Pray Tell. Pray is an older gay man who has lived through many changes within the community and provides a sage wisdom as well as a lot of joy. However he cannot escape the devastation of the virus, leading him to lean on the people he has always mentored.

The only bum note for me was Evan Peters. I just didn’t buy him as Stan. I didn’t understand why he was drawn to Angel apart from her beauty. His performance didn’t have the power of any of the other characters and I wasn’t particularly interested in his internal struggle or his relationship with his wife (Kate Mara) or his slimy boss (James van der Beek). He just came across as a naive and somewhat selfish tit.

Overall I loved it. It was a celebration as well as a sobering look at the struggles the LGBT community has faced. Things have come a long way but nowhere nearly far enough.