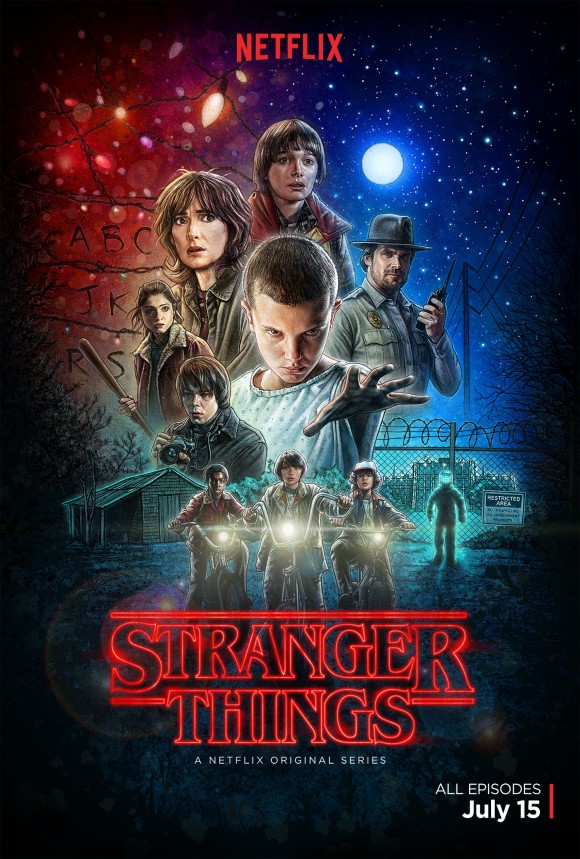 Stranger Things is one of the shows I tried to watch when Little O was a tiny baby and abandoned because I kept having to go an tend to him and I had the attention span of a gnat due to lack of sleep. I felt like I was missing out so recently I decided to revisit it and see if I was right.

One night after a game of Dungeons and Dragons, young Will Byers (Noah Schnapp) goes missing on the way back to his home in Hawkins Indiana. On the same night “Eleven” (Millie Bobby Brown) a strange young girl with a shaved head appears and is taken in by Will’s friends when they realise some very bad people are after her.

As the search for Will continues, his mother, Joyce (Winona Ryder) becomes convinced that Will is attempting to communicate with her through lights and static on her telephone.

Meanwhile more and more people are disappearing and the town sheriff, Jim Hopper (David Harbour) is becoming very suspicious about the secure facility on the edge of town. Could Eleven be the key to what is happening in Hawkins?

There were a lot of things I loved about Stranger Things. The 80’s setting feels very nostalgic and very accurate. I loved the clothing, music and pop culture references. The friendships between the children are charming. The intensity of their bond and their desire to find their friend is untainted by the cynicism of adulthood. Joyce’s desperation to find her child and how she quickly starts to unravel was very relatable. Ryder gives a stunningly believable performance and she’s well matched by the child actors and Harbour. The main characters have great back stories and the flashbacks into their pasts help to build up their motivations. Hopper is a great friend to Joyce and seeing them support each other without a forced romantic connection is heartening.

I thought it was interesting that while Joyce is thought of as a bit of a deadbeat mom that her relationship with her children, including her older son, Jonathan (Charlie Heaton) is much closer than that of the seemingly perfect Wheelers, who don’t even realise that their son, Mike (Finn Wolfhard) is harbouring Eleven in the basement or that their daughter Nancy (Natalia Dyer) is rarely where she claims to be. I loved Nancy as a character. She was feisty, true to herself, a bit naughty and not afraid to fight for what she stood for.

Eleven’s past and the motivations of the mysterious Dr Bremmer (Matthew Modine) are less clear. I feel like maybe some of this is being held back for the second season but that was the one place things felt like they were lacking. I also wondered why no one was suspicious of the mega government facility in the woods prior to the disappearances. And surely Hopper couldn’t have done as much sneaking around as he did just by punching people in the face.

I am glad I gave the series a second shot and I will definitely be carrying on with season two before the new season comes out.