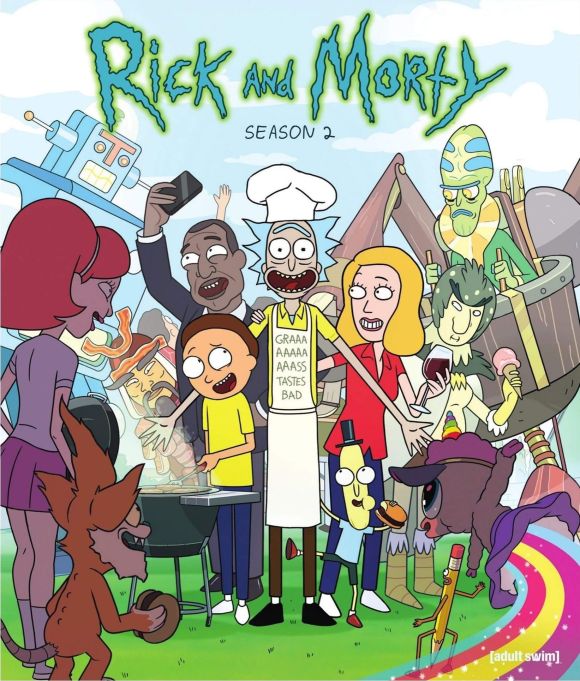 After six months, Rick (voiced by Justin Roiland), Morty (also voiced by Justin Roiland) and Summer (Spencer Grammar) decide to unfreeze time and reconnect with the rest of the world, including Beth (Sarah Chalke) and Jerry (Chris Parnell). This time the whole family gets involved in Rick and Morty’s adventures making for an even crazier collection of experiences than in the first season.

If you though season one was dark and hilarious, season two takes it to a whole new level. This time we get a look into Rick’s past love life, consider slavery in the context of a spaceship battery, see couples therapy at its most disturbing, ask ourselves if something is real just because we remember it, participate in a bonkers singing competition and uncover a galaxy wide conspiracy.

Rick continues to be an selfish bastard but there are little glimmers that show that he may not be pure evil after all, particularly through his bond with Summer. There are a lot of hints towards a dark past filled with terrible sacrifices which suggest that Rick may be suffering from PTSD. While Morty is as weird and jittery as ever he starts finding his voice and his moral compass (not that it steers him very well) and Beth and Jerry… are well, Beth and Jerry – two people who should never have met or had children together. Beth’s daddy issues start to come to the fore, while Jerry fights Beth’s perception of him as much as he fights his perception of himself.

On the surface the show is pure absurdist comedy but if you look a little deeper it’s really questioning the way we see the world and the underlying power structures that keep it running.

We laughed, we felt a bit sick, we got even more hooked. Roll on season 3.