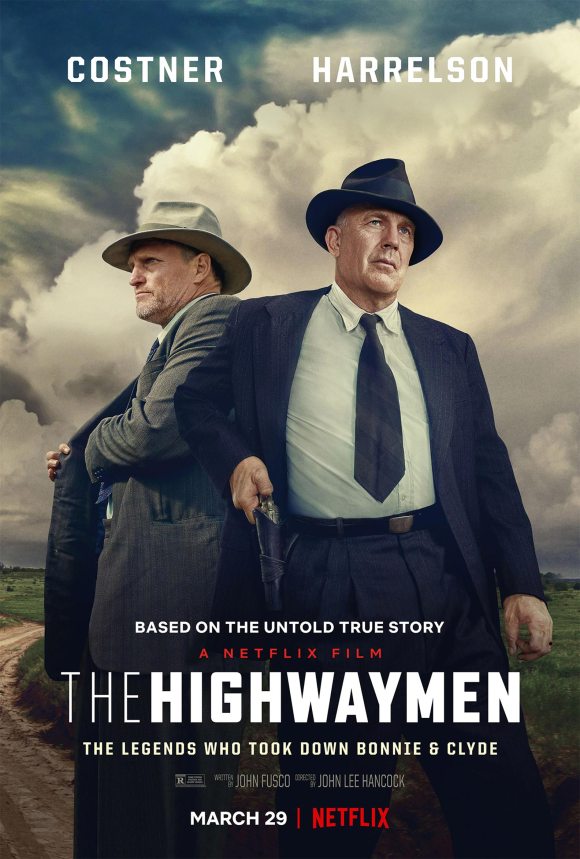 At the height of the Depression in 1930’s, bank robbers and lovers Bonnie and Clyde ran riot across America. With law enforcement failing to make much headway in catching them two retired Texas Rangers are brought back into the fold.

Frank Hamer (Kevin Costner) and Maney Gault (Woody Harrelson) were once the scourge of Texas’ most wanted but age and technological advances have crept up on them. They are no longer as fit as they once were, nor as good at shooting and the FBI’s newfangled wiretapping and ballistics are baffling. However, there is no replacement for good, honest detective work, a bit of shit-kicking and leaning on the right informants.

Soon Hamer and Gault are making progress, much to the fledgling FBI’s confusion. As old wounds surface and it becomes obvious that Bonnie and Clyde will never surrender, will they have what it takes to do whatever it takes?

There are some powerful, well worn themes at play in The Highwaymen. The idea of the old gumshoe coming up against the new guys with all the gear but no idea is nothing new. Nor is the idea of what happens to old soldiers when they are totally worn out. It is obvious that Hamer and Gault have been through some harrowing experiences and then left out to dry. With no missions to follow they don’t really know what to do with themselves. A more interesting theme is that of Bonnie and Clyde’s notoriety and how enamoured the public was with them. Director, John Lee Hancock, makes the decision to keep Bonnie and Clyde almost unseen to take the focus off them. It is clever but a bit under-cooked.

Costner and Harrelson give great performances but neither of them seems to be stretching themselves. They were born to play these roles and they’ve played them over and over again in some form or another so it is a bit like putting on a comfy old shoe.

There are all the ingredients for a great story but the pacing is glacial. Build up is all good and well but there is so much going around in circles and back and forth that I found my interest wandering a lot. I think plodding is probably the best way to describe it. I love a good detective story but this takes one of the most infamous cases of all times and makes it forgettable.

Watchable but not at all special.