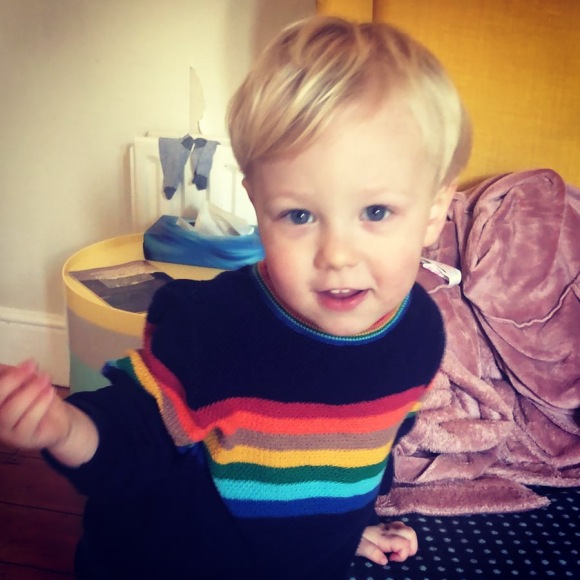 Age: 2 3/4
I like: Boobs, red apples, Kinder Eggs, the Gummi Bear song, Monsters Inc., jumping on and off things

Little O is officially only 3 months away from his third birthday and has been keeping himself very busy.

At the moment he is very concerned about doing things for himself. I hear the phrase “not help, me!” many times every day. This is a bit of a challenge sometimes as it’s unpredictable whether he wants help or not, he can’t always do the thing he wants to do so it can be messy or dangerous and much patience is required. I am learning to at least let him try, even if it is just to avoid the meltdown.

He also constantly complains that his clothes are wet. The smallest drop of water and the offending item needs to be removed immediately. This has resulted in the whole of one of our local coffee shops seeing his “tiddle” as he calls it. I think most of the time he just wants an excuse to get naked, which is his preferred state of being.

His imagination is blossoming by the day and he comes up with all kinds of interesting games and ideas. One of his favourites is turning his pop up tunnel on its side and sticking his arms of the holes to be a robot. He also tells me I am a “ladder” or a “treehouse” when he is climbing all over me.

The last three months have brought lots of adventures. Little O has been continuing his swimming lessons and will be eligible for a certificate in a couple of weeks if he passes his assessment. He keeps telling me he can swim like a dolphin.

He’s also spent a lot of time with his little friends. He regularly begs to see them but the minute they are all together they mostly just argue about their toys.  It is wonderful seeing them all running about together and chatting away to each other. His life is very much enriched by having a little gang to knock about with. Their favourite activities are going to the park and to our local soft plays or for a babychino.

He’s started loving the ritual of going to the cinema (or cimena as he calls it) and can sit mostly still through a children’s feature. He loved How to Train Your Dragon and kept shouting “this is amazing” at the top of his lungs. Sometimes taking him out to places where he might cause a disruption is a bit stressful but I am always glad that he has had these experiences because I believe it teaches him how to behave in different scenarios.

He made his first trip to my office earlier this week and was an absolute gem. Of course the thing he was most excited about was the giant cow we have on the third floor.

Recently his sleep has been improving and we’re down to an average of one wake-up a night, which means my sleep is improving. He’s also become more willing to let me have a lay-in while he plays downstairs with Mr O. Although his ferocious shushing of Mr O because “mummy is sleeping” is almost as loud as when he used to stand at the bottom of the stairs and shout for me.

He’s still a rather fussy eater and says no to even trying most things. I refuse to get stressed out about food so as long as he eats mostly healthy things I leave him be. I was also fussy as a child and now I am a very adventurous eater. He is still breastfeeding so I know he gets a lot of nutrition that way.

We are moving house tomorrow, which will be a big adjustment for him. He has already moved twice in his little life so far but this is the first time he’s really had a sense of “home”. Hopefully it will be a smooth transition and when I check back in around his third birthday he’ll be full acclimatised.