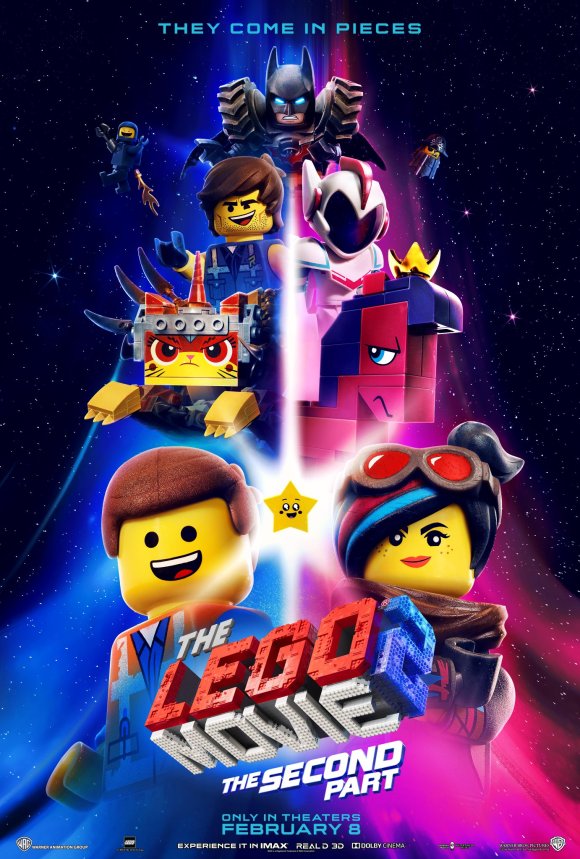 The second Lego Movie kicks off the Dystopian Apolcalypseburg, five years after the events of the first Lego Movie. Following the Duplo invasion the former residents of Bricksburg hav ebeen forced to adapt to a new tougher life that requires constant vigilence and adapting to survive. Of course the one resident who has failed to toughen up and sees nothing but fun and joy in everything is the ever positive, Emmett (voiced by Chris Pratt).

Sweet Mayhem (voiced by Stephanie Beatriz), the general in the Duplo army arrives and insists that Queen Watevra Wa’Nabi (voiced by TIffany Haddish) wants to marry the leader of Apolcalypseburg to bring together their universe. An argument ensues over who is the leader and in the end Sweet Mayhem kidnaps Batman (voiced by Will Arnett), Lucy (voiced by Elizabeth Banks), Benny (voiced by Charlie Day), MetalBeard (voiced by Nick Offerman(, and Unikitty (voiced by Alison Brie) with the intention of taking them to the Systar system.

Emmett decides he must go after his friends and encounters the bold and fearless, Rex Dangervest (also voiced by Chris Pratt). Emmett is impressed with Rex’s attitude and sees him as a bit of a role model to be the tough guy he thinks Lucy wants.

But is the Systar system really the terrible place the residents of Apolcaypseburg think it is? And is Queen Watevra Wa’Nabi actually evil?

The Lego universe continues to be a really fun place to visit. The characters are hilarious, particularly Will Arnett’s narcisstic Batman. I loved the bonkersness of the Systar system that really reflects the fact that it was created by a pre-teen girl and her cutesty but violent army is a treat. Compared to the first film, I liked the way they blended the real world happenings in with with the Lego universe and this time I really identified with the Mom (Maya Rudolph), strange that. It’s super creative and the songs are crazy catchy.

All of that said, it’s quite long for a kids film. I am so much more aware of length now taking Little O to the cinema. I missed a chunk in the middle because he needed a poo and he subsequently fell asleep. It also feels a lot like a cash grab, but then what isn’t these days? It’s not quite as exciting as the first one, which was unlike we’d ever seen before, but it’s still a good laugh and one that the littles will enjoy.