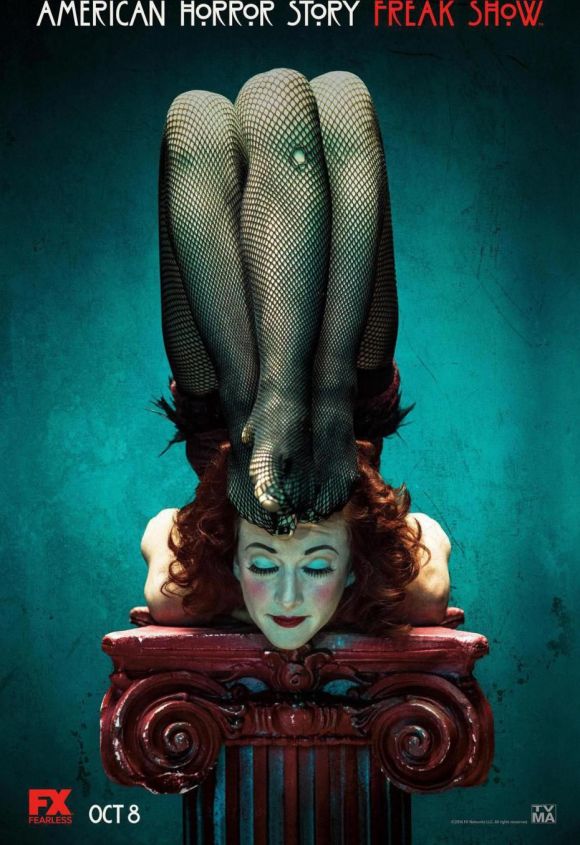 The formula of American Horror Story is quite unique in that each season uses mostly the same cast but changes the characters and settings and then tells a dark and disturbing tale. Mr O and I watched the first three seasons when they came out but then somehow lost track of the show and stopped watching. A friend recently reminded me of it and as past seasons are on Netflix, I decided to catch up a bit.

The fourth season of the show is set in a 1950’s travelling freak show, owned by glamorous German chanteuse, Elsa Mars (Jessica Lange). The carney world is slowly dying as television becomes the primary means of entertainment. When Elsa discovers a pair of conjoined twins who lived in hiding until their mother was murdered she sees an opportunity to draw in crowds and invites Dot and Bette (both played by Sarah Paulson) to join the show.

The twins prove to be a disturbing influence on the regulars of the show, including Elsa’s faithful best friend, bearded lady, Ethel Darling (Kathy Bates) and her claw-handed son, Jimmy (Evan Peters). Meanwhile a sinister clown is stalking the inhabitants of the nearby town, a local wealthy mother and son have become intrigued by the twins and there’s a conman trying to sell their bodies as museum exhibits. And if that wasn’t enough Ethel’s brutish ex (Michael Chiklis) and his three-breasted wife (Angela Bassett) have rolled into town.

American Horror Story – Freak Show has some really strong core themes. It explores what it means to be a “freak” and that in some ways we are all unusual, whether that is something easily seen on the outside or something that lurks underneath and that if we stopped trying so hard to be “normal” we’d be a lot better at accepting each other. It also looks at the nature of family and loyalty and how the family you are born into may not be the family you belong to.

As always the veteran female actors blow everyone else out of the water when it comes to performances. Jessica Lange is an absolute powerhouse as the bitter, ruthless Elsa, while Kathy Bates is a sympathetic figure as the endlessly loyal Ethel, Frances Conroy is chilling as the overprotective Gloria Mott and Angela Bassett gives Desiree Dupree true heart. Sarah Paulson does really well to give the twins very different personalities in what must have been a very challenging performance both emotionally and physically. Finn Wittrock joins the cast as supremely spoilt and very disturbed, Dandy. His performance is intense, frightening and hard to take your eyes off.

It wasn’t all great though, Emma Roberts’ character was incredibly boring and felt totally unnecessary. I’m not sure why there was a sudden influx of new characters in the last couple of episodes, especially Chester (Neil Patrick Harris) the ventriloquist. There were enough people for Dandy to massacre without adding more. Apart from the freaky clown, it was a lot more weird than it was scary, which might have been the point but I expected to be on the edge of my seat and I wasn’t.

This is a solid addition to the anthology but not my favourite season.