I have quite mixed feelings about Bridget Jones as a… concept. I read the first and second novels. I liked the first one. The second one was ridiculous. It is much the same with the films and in an unusual turn of events I actually prefer the onscreen incarnation of Bridget to the book version. I think my biggest problem is that I have never really found any of Bridget’s male leads appealing. The most recent film has just landed on UK Netflix so I decided to give it a go.

On her 43rd birthday Bridget Jones (Renee Zellweger) finds herself finally at her goal weight and with her career as a news producer booming but still single and starting to give up on the idea of ever having children. In an attempt to cheer herself up, she attends a festival with her colleague and falls into bed with a handsome stranger (Patrick Dempsey). Not long after this she crosses paths with Mark Darcy (Colin Firth) who is in the process of splitting with his wife and they have a night of passion.

Not long after this Bridget discovers that she is pregnant but can’t be sure who the father is. Now she will have to navigate not only the idea of becoming a mother but also juggling the two potential fathers and dealing with a new, younger boss who thinks she’s past it. 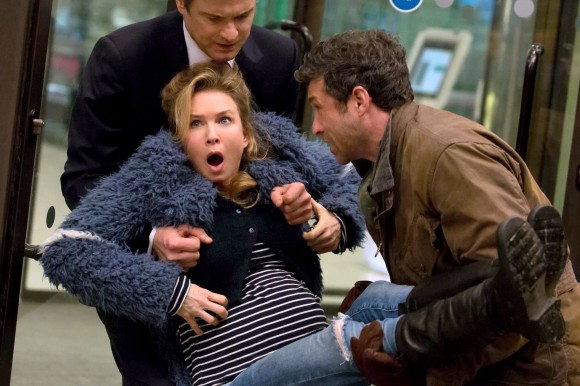 On the plus side, all the old characters, except Daniel Cleaver (Hugh Grant) are back and they’re still fun. I am glad the they decided not to bring Daniel, who is presumed dead after an accident, back as a potential father because that would have been very stale. Patrick Dempsey is a good addition to the cast although his character can be rather inconsistent. Emma Thompson is also great as Bridget’s blunt obstetrician and Bridget continues to be a charming, relatable character. It’s a harmless, fluffy story that won’t tax your brain or emotions too much.

On the downside, I still don’t know what Bridget really sees in Mark Darcy, the trope of pitting women against each other in a workplace in a big bitchfest is uninspired and there are far too many coincidences and silly misunderstandings to make it believable.

Good for a Saturday afternoon while being clambered on by a toddler but not something you’ll remember in a week’s time.