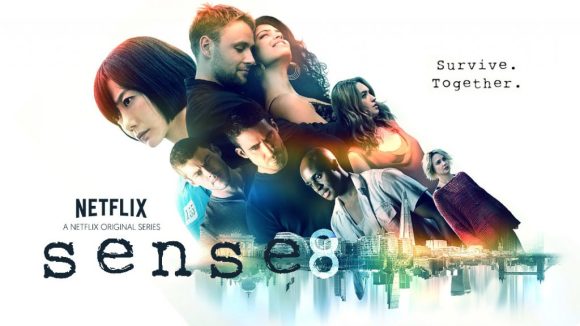 Season 2 kicks off with Will (Brian J Smith) in a drug addled hazed, travelling from squat to squat with Riley (Tuppence Middleton) as Whispers (Terrence Mann) tries to track them down. Meanwhile Nomi (Jamie Clayton) and Amanita (Freema Agyeman) reunite with an old friend as they attempt to evade the FBI, Sun (Doona Bae) crosses paths with a former love as she escapes prison, Kala (Tina Desai) is torn between her two loves, both of whom prove ever more mysterious, Wolfgang (Max Riemelt) becomes a vital part of a gang war, Lito’s (Miguel Angel Silvestre) career is plunged into chaos when he is outed and Capheus (Aml Ameen) embarks on a political career.

In amongst their personal struggles, the cluster works together in a race to find out more about their origins and kind as well as BPO before they are hunted down.

The second season of Sense8 had several challenges. It was cancelled suddenly after the production costs of so many locations became unsustainable, which left it unfinished and with no conclusion. There was such a fan uproar that Netflix agreed to an epic feature length finale released only last month to close the storyline.

Overall it is still my favourite show of all time. Watching the relationships between the cluster become closer and more personal is lovely, as is seeing how they draw on each other abilities to get through life to survive. I think there is something very compelling about being able to share all of yourself with a group of completely non-judgemental people who immediately understand you. I think humans kind of crave that while knowing it is impossible. There is a lot of character development as more relationships outside the cluster are explored along with the introduction of more sensates, especially the fanatical and dangerous Lila Facini (Valeria Bilello). Also, I could watch Doona Bae kick the shit out of people all day.

There are definitely a few pitfalls though. The plot is twistier than a twisty thing and occasionally the Wachowskis take shortcuts with their own mythology, like the introduction of blockers and Nomi’s “digital death”. I was not sold on the switch in actors playing Capheus and it took me a long time to accept Aml Ameen in the role. It’s not that he’s not a good actor… it’s just jarring. Same cannot really be said for Daryl Hannah playing Anjelica, the cluster’s mother and one-time BPO collaborator. She’s given a lot more to do here than appear in a nightie in random places and she just doesn’t measure up. I am also not sure you can just blow up a helicopter with a RPG without any consequences… but hey ho, when you know you’re getting cancelled you pull out all the stops.

I doubt there will be anymore Sense8 made and that kind of breaks my heart because it is a powerful, very inclusive show about how connected humanity could be if we opened ourselves up more. In another way I am quite happy because it remains an almost perfect contained bit of TV magic that I imagine could become diluted over time.

Still recommended over almost everything else.