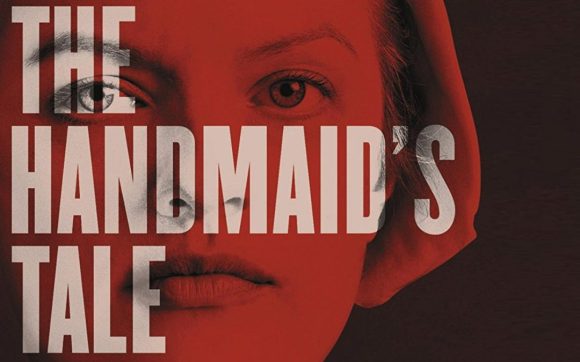 I started watching The Handmaid’s Tale when it was first shown on Channel 4 but we went away on a series of holidays around when the last couple of episodes went up and I was not able to watch them before Channel 4 craftily removed them. Recently the whole boxset of the first season went up onto Now TV so I decided to rewatch the episodes I had watched previously and finish the season.

I was initially interested in The Handmaid’s Tale because I had read and loved the Margaret Atwood novel that it is based on. I was interested to see how it would translate to screen especially in the current environment of ever increasing pressure to control women’s bodies and the rise of right wing Christian fundamentalism.

The series is set in a dystopian near future in Gilead, which was once the United States of America. The country has been taken over by a regime where men are in full control of society and women are subservient. Homosexuality, sex outside of marriage, birth control and any dissent against the regime are outlawed and severely punished with any “traitors” put to death or sent to work in the radiation filled colonies.

Due to severe fertility issues causing a declining birth rate, women who have successfully borne children but are seen as unfit for society are used as “Handmaids”, assigned to high ranking officials to be impregnated by the “Commander” in charge and then give the child away to be raised by the Commander and his wife.

One such woman is June (Elisabeth Moss), who is ripped away from husband ( O-T Fagbenle) and young daughter as they attempt to escape from Canada. After the brutal re-education at the hands of Aunt Lydia (Ann Dowd), a kind of overseer, June is renamed Offred and assigned to Commander Waterford (Joseph Fiennes) and his wife, Serena Joy (Yvonne Strahovski). Here she must attempt to survive a bleak life stripped of her identity and subject to regular rape during a monthly impregnation ceremony.

It soon becomes apparent that no regime can control human nature and nothing is truly as it seems. As June attempts to hold onto her sanity she must find a balance between her desire to find and join the resistance and stay alive while never knowing the true fate of her husband, daughter and former friends.

There are some powerhouse performances in The Handmaid’s Tale but none more so than from Moss. She is often forced to be silent but is able to convey so much emotion through expression and movement that it is apparent what she is thinking and feeling. Her character is strong but at the same time very vulnerable and relatable and it’s hard not to be horrified by what she endures. Strahovski is also excellent as a woman who has been a victim of her own success.

I know some viewers have had an issue with pacing but I personally feel that the slow way the story unfolds by intermingling flashbacks with the present makes it that much more powerful and often leads you to reflect and reinterpret what you have seen. It is an intelligent series that relies on delayed gratification, which is not for everyone.

The cinematography is outstanding with a powerful use of colour to signify not only the bleakness of Gilead but also the intensity of the Handmaids’ suffering. You can almost feel the yearning for some light and colour with the only real intense colour being the red dresses that the handmaids are forced to wear.

With the way things are going at the moment it is not impossible to believe that a society somewhere like Gilead could exist in the foreseeable future, which means that it should be mandatory viewing as a cautionary tale if nothing else. A disturbing but recommended watch both for those who enjoyed the novel and those who have not yet read it.