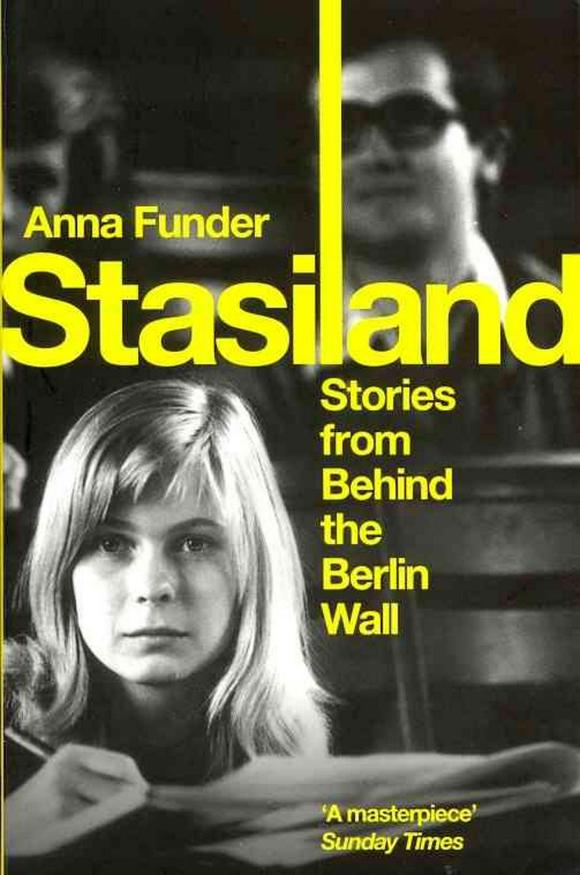 I was recommended this book by Mr O, who is predominantly a non-fiction reader and thought that I’d enjoy this look at life behind the Berlin wall. I was fortunate enough to travel to Berlin a few times for work in my previous role and to actually spend a weekend there in 2016 in the former GDR. I visited the wall and some of the historical sites related to the separation of both the city and the country. I was also a big fan of the film The Lives of Others so prior to reading this I had some interest in the historical context.

Rather than providing a dry purely factual history, Australian journalist Anna Funder shares personal accounts of former GDR residents interspersed with her own experiences of living in Berlin.

Funder is particularly interested in the lives of the “Stasimen” who worked within the regime. The GDR was a massive employer and almost everyone who wasn’t employed by the government was an informer. Understanding how and why things operated the way they did and how these former operatives survived after the fall of the wall is very interesting. It is also fascinating looking at how some Stasimen justify their actions in the past, how they were hooked deeper and deeper into a system that seemed all powerful.

Funder also meets up with every day people whose lives were irrevocably changed and damaged by the regime, often because the smallest actions. It can be hard to imagine a world where something as simple as posting a few flyers can end in a lifetime of persecution or where a mother can be separated from her child because of a change in border control… but these things happened.

Mixed into this is a strange yearning for the past from many areas of society as well as those desperate to know what happened in the past even though there is no way to change it. Funder herself is confused by what she wants from life and drifts in and out of bouts of furious work and binge drinking with the leader of what was once the GDR’s greatest rock band.

All in all it’s an account that often reads like a novel but is very much a true account… well the truth as remembered by those who experienced it. It’s a touching, humorous, frightening and somewhat haunting look at a massive societal upheaval that is really in very recent history. In many ways it is a time and a place that the Unified Germany wishes to forget but it’s impact is deep and lasting, which Funder gets across very effectively.