Two of Mr O’s fave shows for our latest Christmas specials to make up for Made in Chelsea.

Day 21: How I Met Your Mother – How Lily Stole Christmas

Set: On Christmas Eve
What happens?: Lily finds out Ted called her a bad name while she and Marshall were broken up and takes down the entire festive display. Barney is too ill to celebrate.
Does it snow?: Yes
Is it heartwarming?: Rather
What lessons are learned?: Christmas is a time for forgiveness. Everyone gets sick eventually.

“Robin: You’re spending Christmas Eve with your family? Baby, that sucks. I’m so sorry.
Ted: Uh, they’re fine. They’re just… they’re a little weird. You know they don’t believe in gifts or Christmas trees. And they think Santa’s how Satan spells his name when he wants to trick us.” 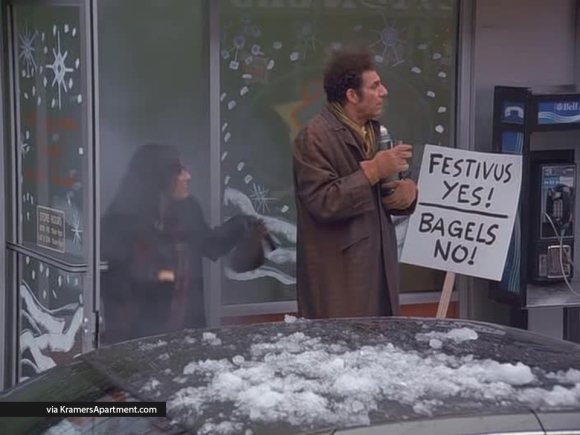 Set: Around the Christmas period
What happens?: George has to introduce his boss to his father’s bizarre made up holiday, “Festivus” to get out of the fact that he’s given his colleagues fake presents.
Does it snow?: Yes
Is it heartwarming?: No
What lessons are learned?: None. It is Seinfeld. They never learn their lesson.

“Frank Costanza: At the Festivus dinner, you gather your family around, and tell them all the ways they have disappointed you over the past year.”