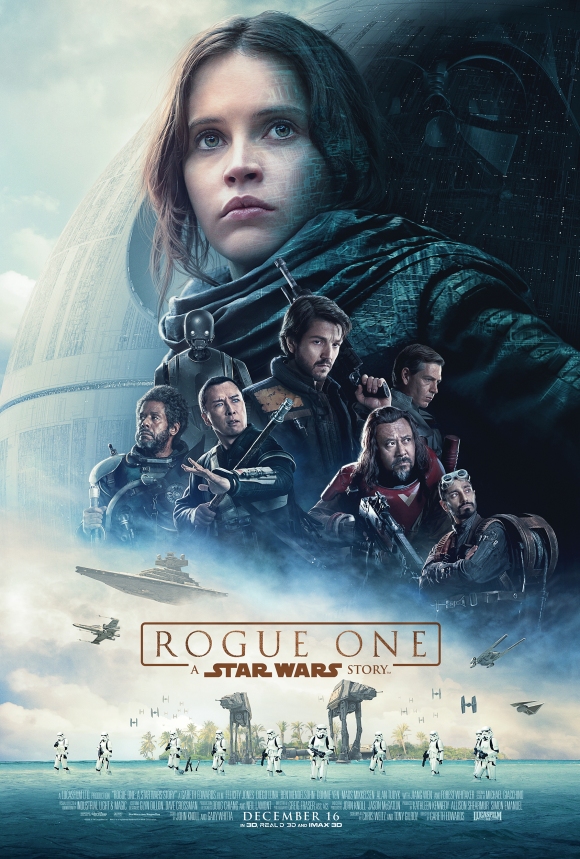 I am only a year late on this one but I finally got a chance to watch Rogue One last weekend. When it comes to the Star Wars universe I am probably a middle ground fan. I love (most of) the films and characters. I don’t remember every element of the plots at an intricate level, I can’t name all the characters on the Star Wars Dobble cards and I don’t know what any of the ships are called apart from the Millennium Falcon.

Rogue One is the first time I have experienced the Universe outside the sort of “Skywalker” storyline (I have probably also described this incorrectly but y’all know what I mean).

The film follows Jyn Erso (Felicity Jones), the daughter of Galen Erso (Mads Mikkelsen) the engineer who ultimately designed the Death Star. Following Galen failing to evade the Empire and ending up in their control, Jyn is orphaned and raised by Rebel fundamentalist, Saw Gerrara (Forest Whitaker) – who makes up these names?

After she is left behind by Saw during a battle Jyn makes her own way in life, until she is targeted by the Rebel Alliance as a potential route to Saw. They need her because an Empire pilot (Riz Ahmed) has defected and has a message for Saw but he’s not taking visitors.

Jyn is reluctant to help anyone do anything, but Rebel leader Cassian Andor (Diego Luna) isn’t taking no for an answer. With Force devotees, Chirrut Îmwe (Donnie Yen) and Baze Malbus (Wen Jiang) as well as a reprogrammed Empire droid (voiced by Alan Tudyk) in tow they set off on an adventure that might just change the course of the rebellion before it’s too late.

No, I have no idea what a “feminist agenda” is… just smile and nod, mate.

So what I liked…

Jyn is a strong female lead. The Star Wars universe is doing really well in giving us female main characters… although she is also virtually the only female character in the entire film #awkward. Alan Tudyk is absolutely hilarious as K-2SO and between him Yen and Jiang, they provide a lot of fun. There’s also lots of adventure, it looks amazing and Ben Mendelsohn is a legend.

On the other hand, although I usually like Felicity Jones, she kind of annoyed me here. She just didn’t seem like she was enjoying her role which I think is essential for this kind of film. There is only a whiff of romance between Jyn and Cassian but it’s completely unnecessary and adds nothing to the plot. The story line is good but not great, there are too many characters and there is too much faffing around with Empire hierarchy bollocks. Nobody cares about your dick waving competition to see who gets to be uberleader. Why are there zero females in the Empire? Does it not offer maternity benefits or something? Anyway not the best Star Wars film… but certainly not the worst.