Because of this, I figured a documentary by him looking at the world’s strangest, most secretive religious cult would be outstanding. It wasn’t.

The problem with making a documentary on something that doesn’t want to be documented and is also extremely powerful is that you’re essentially talking to a brick wall. There is no amount of British charm, endless calm or disarming guilelessness that is going to make the Church of Scientology say, “oh well alright then… come in and see how we’re fleecing millions of people worldwide for pure profit.”

Sure Louis manages to convince some famous former Scientologists, including Marty Rathbun, to talk to him… but it immediately comes to light that their version of the truth is disputable and they’re not sharing anything new.

He also comes up with the idea of reenacting supposed scenes involving the Scientology leader, David Miscavige using actors. He even has someone playing Tom Cruise. It is an interesting premise and you get an idea of how some Scientology methods work and what the environment might have been like for those sucked into the cult but it’s still just supposition. 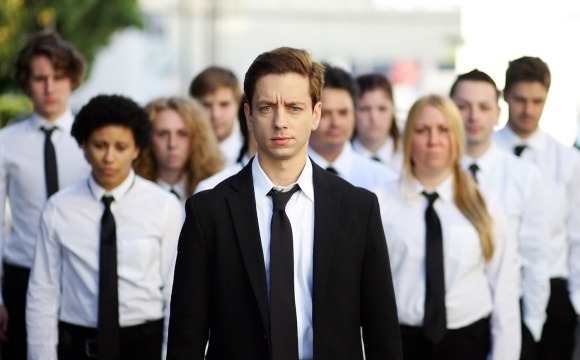 They see me rolling… they can’t film it…

In the end the whole thing boils down to rehashed “insights”, a questionable reenactment and loads of scenes of Louis arguing with Scientlogists about whether roads are public or not and why is filming them vs why they are filming him.

You get the sense that Louis himself was frustrated with the lack of progress and access but felt like he had to present something even if it wasn’t really comparable to his other work.

For me this was a huge disappointment and really not what I would expect from Louis Theroux. I would highly recommend checking out some of his documentary series which are available on Netflix to see what he is truly capable of.