Age: 11 1/4 months
I like: Stealing other people’s food, olives, bubbles, playing outside, boobs

We officially have less than one month to go before Little O is a whole year old. It’s crazy because in some ways it feels like I had him yesterday and in other ways I can’t remember a time when he wasn’t here… but let’s see how he’s getting on at 11 months.

We are slowly seeing some sleeping improvements. We’ve started putting Little O to bed a bit later and he’s been putting up a lot less of a fight to go down and he stays down for longer. We’ve also had far fewer middle of the night parties and pre-6am wake-ups. The other day I even managed to leave for work before he surfaced. Although that made me sad because I didn’t get to kiss him good-bye. He still wakes up a fair bit in the night but it’s manageable.

In the last month Little O has discovered that food is actually rather delicious and he’s been quite enthusiastic about his meals. He has even started wanting a little taste of whatever we are eating, which often results in him actually taking food from your mouth. His tastes are varied and unpredictable but over the last month I have watched him eat pepperoni (which he did in a kind of a meat trance), olives, goat curry, falafel and lentil casserole. Some food is still better just for smashing up… especially strawberries. He also continues to breastfeed with gusto when I am with him and he takes expressed milk when I am not.

Little O now distinctly says “dada” and “mumum”. Sometimes he appears to be referring to Mr O and I. Other times he’s just shouting things. He certainly loves the sound of his own voice and babbles, mostly joyfully, all day. He loves to be kissed and cuddled and will seek out affection in between his games of unpacking everything we own. He’s very recently started waving at people (and Mr Tumble on the telly) but it’s a bit hit and miss. Sometimes you get no waves and other times you get both arms being windmilled at you.

Little O is still getting around crawling. He is more stable standing and occasionally accidentally stands without holding on and freaks himself out. He’s gotten good and things like climbing off the sofa and trying to climb up the bookcase. He will also take a few steps if you hold his hands. 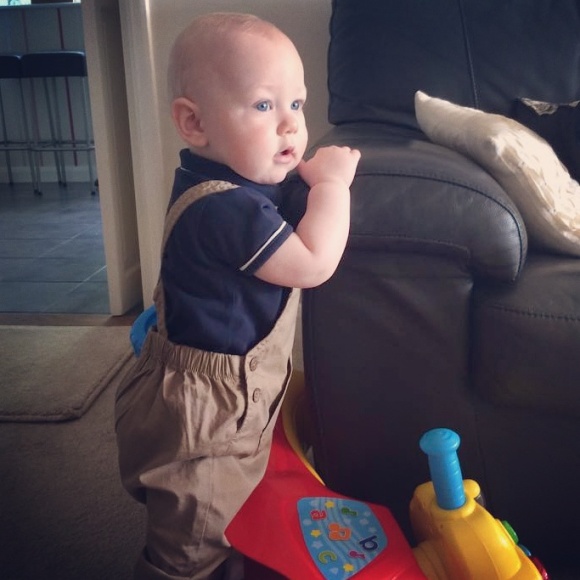 Little O now weighs 23lbs 9oz/10.7kg. He is still following the 91st centile line but his weight gain has slowed down because he is so active and also because he was really ill this month and went off his food for almost a week. Good thing he has lots of reserve chub to keep him going. He is now wearing exclusively 12 – 18 months clothing.

We’ve only had one more tooth since last month (thank goodness), so that gives us eight in total. 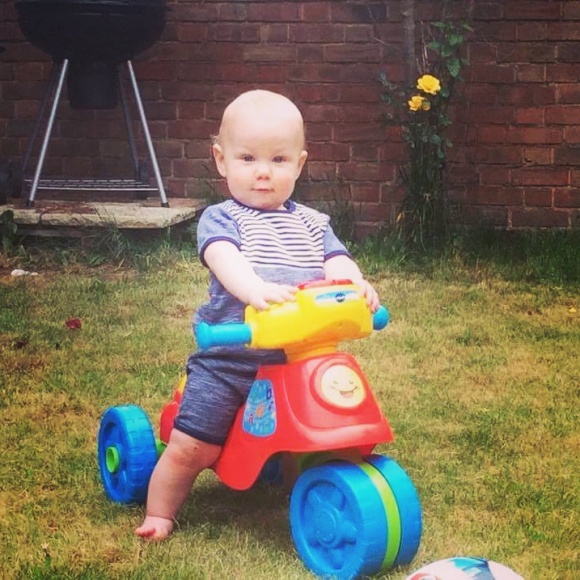