Weeks old: 36
I like: Everything I am not supposed to touch – especially wires, boobs, biting people, bubbles
Mummy is learning: To find the balance between letting me explore and stopping me from injuring myself

In the last week Little O has become fully independently mobile. While he’s been able to move around by himself up to a point for a while, in this last week he’s taken it to a new level.

I think I was expecting him to crawl in the traditional all-fours method before he’d actually be able to get anywhere but instead he’s gone for a kind of army crawl. One of the mums from our playgroup has an older son who is similarly large for his age, said her little boy was similar because he struggled to fully lift his weight with his upper body. 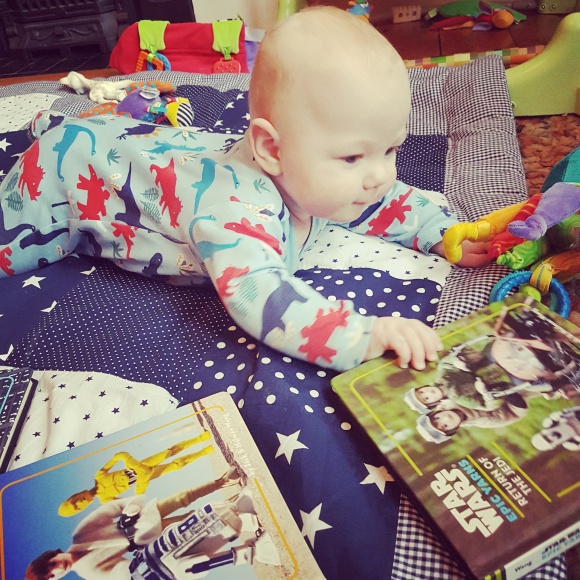 What this means is that he now finds his way to every hazard in the room within seconds. He’s a really big fan of wires, radiators, the sharp metal fireplace, mobile phones and just being under things and in corners. This means leaving him uncontained for even a few minutes is not a good idea. At some point he managed to loosen the TV aerial cable without us noticing and we actually thought there was something wrong with the reception. He just wants to explore every element of every room and it’s very interesting seeing what grabs his attention… like a piece of chipped pain on the skirting board near our hallway door that he’s obsessed with.

I am finding it quite hard to balance my mum fear that he’s going to injure himself with knowing that he does need some freedom to explore and practise becoming more mobile. He’s already manage to bump himself on the head a few times and scared

the life out of me but seeing how frustrated he gets when I retrieve him from under the TV or sofa makes me determined to let him loose… within reason.

I realise that once he stands and walks it’s going to be even more intense. He’s already starting to follow me out of the room so I think my time of going to the toilet on my own is soon coming to an end… This coming week is also my last week of maternity leave before I return to work full time… talk about mixed feelings…