Weeks old: 35
I like: escaping fast, shouting, “dadadada” at the top of my lungs, farting, boobs
Mummy is learning: that dressing an 8 month old is like trying to put an Octopus in a string bag

Unbelievably Little O is now 8 months old (didn’t I just have him last week?) so I reckon it’s time for a bit of an update.

Sleeping
Little O is still not a particularly talented sleeper. We have decided to take the “whatever it takes for everyone to get some sleep” philosophy. This means he goes down in his cot at the start of the night and Mr O and I usually manage dinner and maybe a couple of episodes of a TV show. Sometimes we even get to cuddle in bed together for a couple of hours. Eventually though Little O comes and sleeps with me… often on me… and Mr O sleeps on our futon because we can’t all fit. This way everyone sleeps enough to function. In the morning Mr O does the first couple of hours when Little O wakes up at about 6 and then we switch and he goes back to bed. Of course we won’t be able to do this when I go back to work in 2 weeks. We are also planning to buy a bigger bed so everyone can fit. I know some people claim we’re creating bad habits but I’m not really interested in their opinions. I understand why Little O would be scared to wake up and be alone at this tiny age. He’ll sleep on his own when he’s ready.

Eating
After my excitement at Little O getting into his food last week, he’s decided this week he’s a bit over it. It seems this is relatively common with baby led weaning and I think it might be due to the fact he’s working on two new teeth. He’s still a total boob monster so it’s not like he’s not getting his calories. I do wish he’d eat just a little more as I’d worry less about going back to work but he is more interested when I’m not around so I think it’ll happen naturally.

Communication
Little O is getting more and more “talkative”. Mostly he shouts “dadadadadadad”. I don’t get a look in. He also does lots of gesticulating and he suddenly has lots of new facial expressions to express his moods.It really feels like he is trying to communicate with us and that he understands some of what we’re communicating with him and it’s very exciting.

Mobility
Little O is now very close to crawling. He can get up onto his hands and knees and sort of “rev” but he can’t actually move forward. He can, however, pull himself along really fast so he gets from one side of the room to another in a flash. This means we really can’t leave him alone for a moment because he’s liable to encounter a sharp corner or some cables or just something he shouldn’t play with. We’re going to start baby proofing this week.

Size
At 8 months Little O weighs 21lbs 10oz (9.9kg) and is comfortably in 9 – 12 months clothing. This means he’s still on the 91st centile and essentially a bit of a beast. Mostly it seems he is very long. I think my Dutch granddad had a hand  (or maybe a long leg) in it. 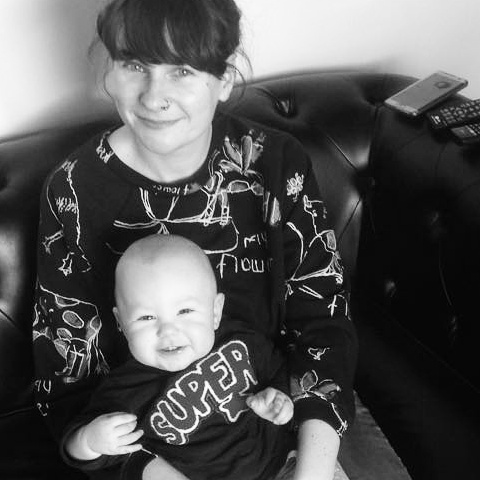 Possibly Little O is too young to have any political views but he is growing up in a household with very strong ones so I think he’s going to find himself listening to various debates throughout his life. On Monday Mr O and I joined some like minded parents to protest against Donald Trump having a state visit to the UK, because frankly his beliefs are in direct opposition to what we believe are quintessential British values – tolerance, respect, fairness, inclusivity. None of us wanted to take our children to a big demonstration but we wanted to make our voices heard so we got together and organised our own small day time protest, under the banner of Families Against Reckless Trump (#FARTrumpuk). I also got to shout at the health secretary… but that’s a different story. Whether Little O will look back at his first protest with pride or embarrassment is anyone’s guess but I’m proud that we took him.