Weeks old: 31
I like: Talking to myself, the telly, my breakfast…
Mummy is learning: To keep the antibacterial wipes close

This week’s post was supposed to be about leaving your baby (because I actually successfully left Little O with Mr O for a whole day) but that’s going to have to wait a week since our home has been hit by a stomach bug.

It started with me on Thursday night. Mr O was at work and I went to bed early, having put Little O down to sleep. When I got into bed I felt a little queasy but I didn’t really think anything of it. Unfortunately the vomiting started just as Little O woke up for a feed. This left me in a position where I had to keep putting him down mid-feed in order to be sick. It was awful because he was screaming for me and there was nothing I could do because the alternative was being sick on him. Mr O was amazing when he got home but Little O still only really settles at night for me and feeds in the night so I spent the rest of the night alternating between caring for him and rushing to the bathroom. 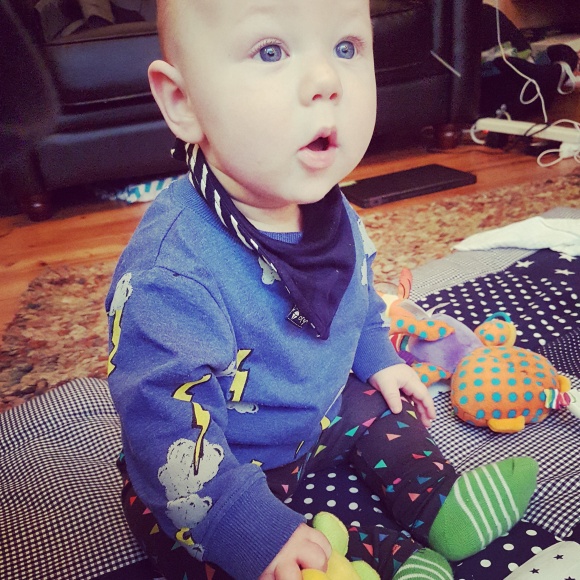 Yesterday was not pretty. Although I had stopped being sick, I had no appetite and had also not slept. Mr O was around for some of the day but had to go to work and I can tell you that looking after a lively baby when you have no energy and feel nauseous, isn’t very much fun. I kept telling myself that at least once Little O was down for the night I could go to bed very early and try to get some rest. I was in bed at 7.30pm.

Little O started vomiting at 7.35pm. Vomit. Vomit everywhere. Again Mr O was super helpful with the clean up, changing Little O and helping me get him back to sleep once he’d stopped vomiting but he obviously needed comfort and would only sleep on me. So again, I did not really sleep.

Today the vomiting continued albeit less frequently and was topped up by some pretty epic nappies. I still have no appetite so I haven’t eaten much and have less than no energy. My house is a disaster area, the washing machine has broken down (thank god we live near my in-laws and they love us enough to come around and just take away the vomit filled washing basket) and I feel like a complete failure.

Motherhood is a great humbler. You might think you can handle whatever the universe throws at you but it only takes one vomiting baby to turn you into a wreck… well me anyway. I imagine other mothers are doing a much better job in this kind of situation than I am.

Please everyone send wishes to whatever gods, machines or lizards you worship that the vomiting stops completely and that all the O’s get a decent night’s sleep tonight or I might not make it to Monday.