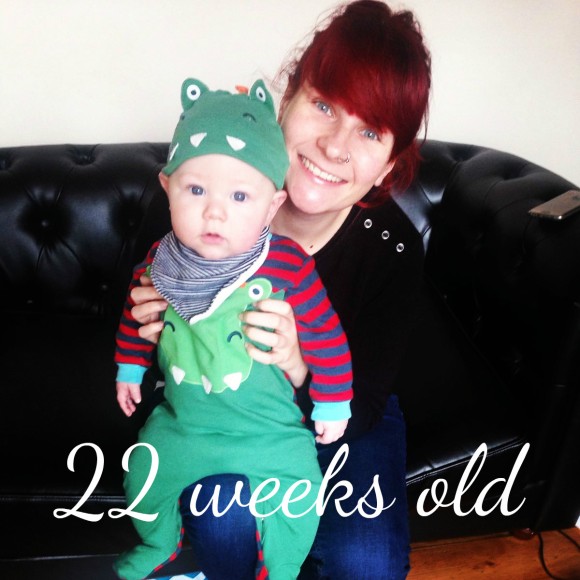 Weeks old: 22
I like: Playing with my feet, squealing at the top of my lungs, playing in my jumperoo, boobs… sort of

Today I caught up with some friends in London, including my friend, D, who witnessed Little O’s actual birth. Regaling the group (none of whom have children) with the story of Little O’s entrance into the world, which she watched at the “business end” was quite something to listen to and I got the idea that the fear of god was being put into everyone – not only at the idea of the pain of giving birth but also the possible after effects.

This made me think about some of the concerns I had when I was pregnant about how having a baby would change my body… possibly permanently. I wanted to know how having a baby had changed other real women’s bodies. So five months in, I am going to tell you (warts and all, so stop reading now if you don’t actually want to know) what’s changed for me.

Disclaimer: I am not suggesting that my recovering from pregnancy and childbirth is typical or that there is any typical kind of recovery or that there should be any kind of pressure on any woman for her body to be a certain way after having given birth. I am aware that I had an almost completely straightforward delivery and was very physically fit before and during my pregnancy. This is purely my personal experience.

Possibly I should skip this part but I know that it was one of the things I wondered about so I am just going to be frank. I remember reading on Scary Mommy that you should avoid even looking at the, er, exit site until months after birth because you were likely to be horrified. This was not my experience at all. Despite having a minor tear it took very little time for my bits to go back to exactly where they were before. There is no discernible difference to me and I have it on good authority that it all continues to operate as before.

I have lost the weight I gained while I was pregnant. I think a lot of this is down to the ravenous beast like qualities of Little O as I have been eating rather a lot of cake. My body is a bit of a different shape than it was before I got pregnant, which means I sometimes wear the same dress size that I did before and sometimes have to size up.

I have never really had a flat stomach. I have always carried any extra weight on my belly. When I lost weight before I got pregnant my stomach was still not really flat as it was an area when I had a bit of stretched skin. Post baby I definitely have a bit of a mum tum and I am not sure even with intensive gym sessions if it will ever be “firm” or if I will ever wear bodycon dresses again… well not without Spanx anyway.

I thought I would lose tone in my limbs really quickly considering that I went from biweekly personal training sessions to long walks and very occasional runs. However lifting a baby that weighs 3lbs more than he technically should right now as well as having to sway him in a sort of half squat position to get him to go to sleep means that actually very little has changed.

While I was pregnant my hair stopped falling out completely. I have very thick hair so it essentially turned into a hedge. About four months after Little O was born it started falling out in much bigger quantities than it ever has before. My hair definitely feels thinner than it used to. I think if my hair was thinner to begin with this is something that would really bother me but because my hair is so thick normally it’s actually kind of made it more manageable. Hopefully it will stop though before I am completely bald.

Apparently pregnancy hormones change the way your body responds to plaque and that tooth decay is common. This is why the NHS offers free dental treatment to pregnant women and for a year post birth. My first postnatal dental check-up with my new dentist revealed that this had happened to me. I have had to have two fillings replaced and a root canal and crown done. It also transpired that an infection had set in under my existing crown that was so bad that there was no choice but for me to lose the tooth completely. Fortunately the tooth is right at the very back of my mouth so cosmetically no one would be able to see it but it is probably the most obvious post pregnancy change for me.

Having gained and then lost a lot of weight I actually had a lot of existing healed stretchmarks. What this meant was that my pregnant belly just expanded into them and I have only one little underbelly stretch mark that is new. This means I do have some “tiger stripes”… they just happened to be there before I had a baby.

I am going to reserve judgement until I stop breastfeeding. It’s hard to know what they’ll be like after a couple of years of baby feeding but I can confirm that the pregnancy nipple-darkening is not permanent.

For me, the physical changes have been a bit challenging. I have days where I feel fat and flabby and milky and a bit battered but I think most of this is coming from the inside rather than the outside since pregnancy, birth and new mumhood has been much more psychologically than physically challenging for me. I imagine it will be a lot longer than five months before I regain the confidence, spontaneity, clarity, calm or feeling of “togetherness” I had before I fell pregnant. Probably years. Quite possibly never. So if you’re planning on a baby, pregnant or have recently become a mum I would say embrace and be kind to your new body because you’ll need your strength to keep your shit together, not worry about tum jiggle.