I like: My kick chimes, rolling over (only when daddy is looking), looking at myself in the mirror, MONKEH

Today I want to talk a little bit about a side of being a mum that I don’t think enough people talk about… the days where you just kind of want to give up. I think they’re probably more common than you think.

This last week has been really hard. In my last post I mentioned that Little O and I had both been unwell. It didn’t affect either of our moods in a positive way. Although I don’t really like to admit it, I am quite a short tempered person anyway. I get frustrated very easily when things don’t go my way. Sort of like a four year old. My mum says I started stamping my foot as soon as I could stand. When I am ill my already short temper goes from centimetres to millimetres. Coinciding this with Little O being ill was a recipe for disaster.

Little O is generally a pretty happy baby, which is something for which I am very fortunate but his cold combined with his third round of injections and a growth spurt made him more needy than he has ever been. Suddenly my happy baby decided he didn’t really want to play on his own at all and he didn’t even really want to play with me. What he wanted to do was scream in my face, while writhing like a ferret in a windsock. The only thing that sort of sometimes maybe helped was me rocking him. You can imagine how great rocking back and forth for hours at a time, while really nauseous and dizzy is. 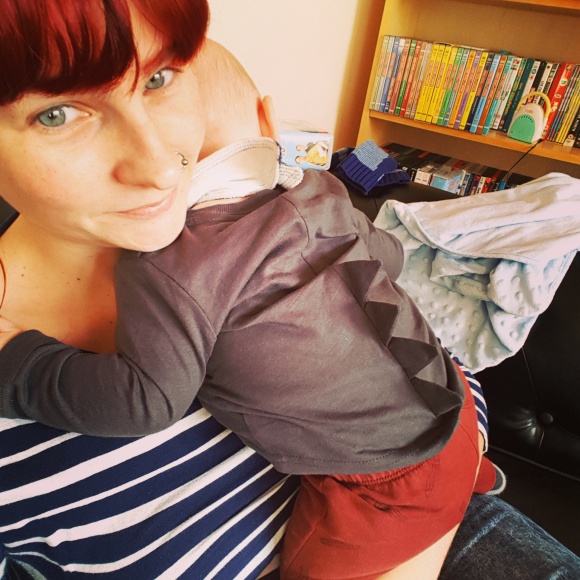 He topped this up with some horrendous nights and very early wake-ups. I found myself starting the countdown to bedtime at 8am.

I cannot fault Mr O for helping as much as he possibly could but he has a new job, is busy doing loads around the house to ensure we don’t live in filth and squalor and ended up being just as sick as I was for a couple of days.

What made things even worse was that Little O seemed to be perfectly happy with everyone but me. He beamed for Mr O and cooed at Mrs O Senior but howled his head off the second he was in my arms. Some of my wiser friends with older children ensured me that babies do this. They take out all their rage, frustration and misery on their mums because they know that they are safe and loved unconditionally and that their mums can handle it. While that sounded logical to me in my heart it just felt like he hated me.

And so I had a give up day. On that day I told Mr O that I was going to end my maternity leave, start feeding Little O formula and go back to work immediately. I didn’t want to give up because I wanted to give up on my baby but more because it felt like he’d given up on me and that he’d be much happier if anyone but me was looking after him because he must be sensing my frustration and feeling my short-temperedness as I held him.

The very next day he seemed happy to see me again. It might have been because I invented a game called “tiddler out kick about” (that we’re definitely going to have to stop playing before he goes to school and tries to share it with his friends) or because he just didn’t feel as frustrated or miserable himself anymore. Whatever caused the change in his mood it immediately made me feel glad I hadn’t given up and guilty that I had become so frustrated.

The more I think about it the more I realise that it’s probably pretty common to have give-up days because babies are hard work yo! And that this was just the first of many many days in the coming years that I am going to want to throw the towel in that’s okay… because I know no matter how much I want to give up and even if I do give up on certain things what I will never give up on is being Little O’s mum and he and I are both just going to have to deal with that even when we’re angry with each other.