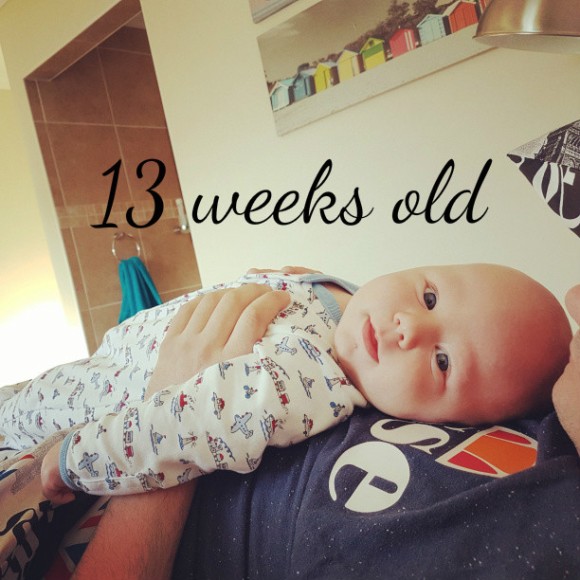 Weeks old: 13
I like: Dribbling, boobs, my thumb
Mummy is learning: How to rock me without getting RSI

The last week of our holiday was a week of firsts for Little O. For him the most exciting one was probably successfully getting his thumb into his mouth for the first time and soothing himself to sleep by sucking it. Unfortunately it was a one-off so he’s become obsessed with getting it back into his mouth. This means we get to listen to hours of him slurping as he accidentally gets both thumbs in at once, gets his thumb in but fails to close his hand or sticks his thumb in too far and gags. I am really hoping he figures it out soon not just because his inability to do what he wants to is really frustrating him but also because a self-soothing baby equals a mummy with a bit more freedom.

Little O with his cousins, Little S and Littlest S

Sometimes the outtakes are the best part…

His next first was dipping his toes in the sea. When we got back to my dad’s house in Somerset West the weather had finally improved and we were able to go for a long scenic drive finishing in Gordon’s Bay for lunch. There was a lovely beach opposite the restaurant we went to so Mr O and I couldn’t resist dipping not only our toes but also Little O’s in the ocean. I doubt very much that he knew what was going on but he seemed to like it since he was giggling away. 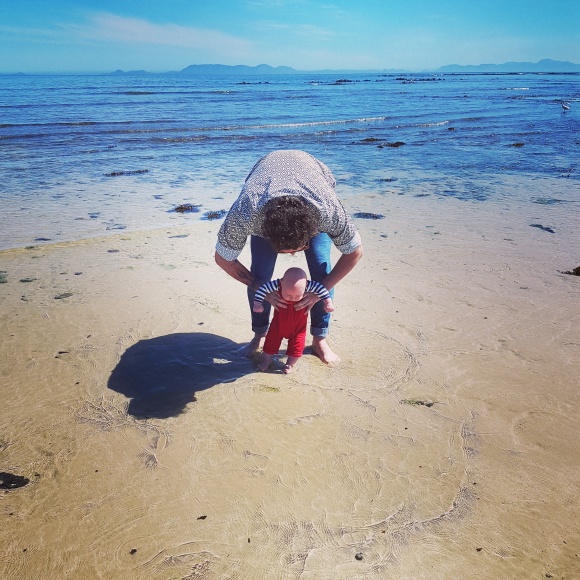 The first I was most excited about was Little O sleeping through the night. On Tuesday night we made our journey home and I was utterly dreading the journey because Little O has become a lot more unsettled in the evenings recently. We were offered a sky cot in the plane. Little O has never slept independently so I was pretty sure he wouldn’t have any of it but Mr O convinced me to try and low and behold he slept from midnight to 8am with no complaints.

It was like some kind of miracle. The journey was not stress free though since once he’d woken up he was less than thrilled that we were still on the plane and he didn’t really fancy the connecting flight or the cab journey home so by the time we actually got into our own front door all three of us were knackered. We had a lovely first holiday together but I am very happy to be back in my own house.

On our first night home Little O slept in his moses basket for the first time ever. He didn’t manage the sleeping through and I had to feed him a couple of times in the night but he was happy to go back once he was full up and slurp his way back to sleep from 9pm to 5am when he decided he’d like a cuddle. I actually fell into a deep sleep for the first time since he was born so I am hoping this is the new norm, especially since Mr O and I both have colds and could do with a little rest!