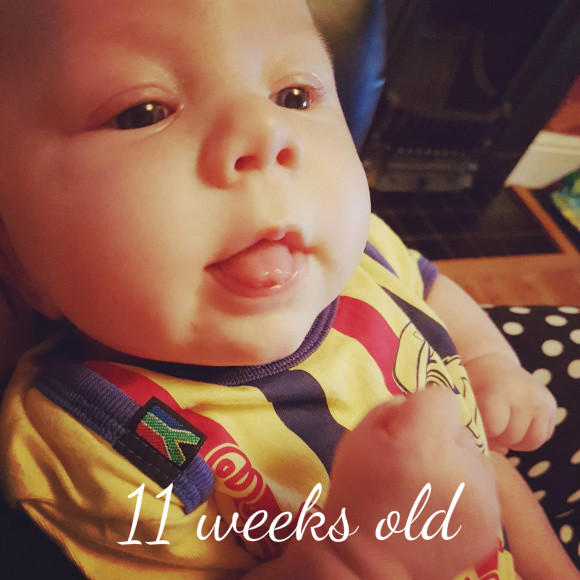 I like: When daddy pretends to crack an egg on my head, mummy kissing my feet, the painting on Oupa’s lounge wall, boobs

Mummy is learning: To improvise

Finally this blog is actually coming to you from South Africa, which means we have successfully survived 18 hours of travelling with a small baby that involved an hour and a half in a cab and two flights… one of which was 11 hours long.

I was expecting the flights to be a bit of an ordeal but I have to admit that I was pleasantly surprised. Little O gave exactly zero fucks about the first flight. He didn’t even wake up for take off or landing. He was more annoyed about being in the cab!

For the second flight the desk agent was kind enough to give us a row of seats with a free one between us which meant we could spread out. Little O continued to be chilled, mostly just sleeping on the open seat between us and occasionally indulging in a boob. It wasn’t 100% smooth sailing though since he treated us to two poonamis and made me feel a bit more justified in packing 4 outfits for the journey.

There was a couple in front of us travelling with a little boy of about 2 who were having a much tougher time of it. He wasn’t naughty or disruptive… just very lively and very interested in Little O. At various points of the journey he offered Little O his dummy several times as well as a slice of lemon and seemed puzzled that he didn’t want them. I fed Little O freely on the plane without a cover because I couldn’t be bothered to wrangle it for such an extended period of time. I’m not sure anyone really noticed except for the aforementioned little boy in front of us who at one point while watching Little O feed put his hand on my other boob and looked longingly at me. Sorry little buddy.

We had a brief meltdown 20 minutes pre-landing and then I thought we were free and clear… but then we got to the last items off the luggage carousel and we were missing one of our bags and Little O’s carseat/top half of our pushchair! I threw a bit of tantrum but there was nothing the airline staff could do but file a report.

I had imagined a really beautiful, emotional first meeting between my dad and Little O but it ended up being a highly stressful situation as we tried to figure out what to do. In the end there was no choice but to put Little O in the car with no carseat. He and I both cried all the way home.

Charming Auntie N… and Auntie N, my brother’s partner and her mum

On taking stock we realised the missing case contained all our toiletries, our underwear, my shoes and everything the nurses had given us for my surgery aftercare. We were less than thrilled.

Fortunately the bag showed up a day later. The carseat is still awol. It’s been really limiting. We’ve managed to borrow a carseat but it’s not ideal so we can’t travel very far from my dad’s house and with no pushchair, outings are challenging anyway because he has to be in the Baby Bjorn or held. We are hoping it’s still going to show up but the airline’s communication is dire. Wish us luck.

Mr O tries to tempt Little O with a sausage