Weeks old: 0.5
I love: Being held folded in half like I was in the womb, boobs, sleeping on daddy’s chest

So this is my first baby chronicle. I am not sure how frequent they will be. I think it’s going to depend very much on how much time I find and when I find it but I wanted to share the story of Little O’s arrival into the world before I start forgetting bits of it. I am pre-warning everyone that this post is going to be relatively graphic so if words like cervix and mucus plug make you cringe, don’t read this post. Just look at the pictures.

As I think most of you are aware, my labour was induced because of my gestational diabetes. Induction is the term used when your labour is kick started artificially. This can be done for various reasons but most commonly is when the baby is more than 13 days overdue, or earlier if there is a medical reason that might mean a full term birth is risky, which was the reason for my induction at 39 weeks.

There are various induction methods available but mine was the one most commonly used in UK hospitals where a hormone pessary is inserted alongside the cervix to encourage contractions and make your body believe it is in natural labour which then leads to the cervix dilating.

When the midwife put in my pessary in at 2pm she warned me that my cervix was still closed and because it was my first baby that very little was likely to happen. In fact I probably wouldn’t feel a thing, have a good night’s sleep and then have a new pessary inserted the next day to try again.

Initially she was right. Mr O and I had some snacks, played cards and chatted. Normally I would have been on a ward but the hospital was very full (according to the midwives this always happens on the full moon because all the babies want to come out and see it) so the only place they had to put me was a private room you would normally pay for. I was very, very lucky. At about 9pm with the midwife’s encouragement I convinced Mr O to go home and get a good night’s sleep. He was welcome to stay but there was only a chair available for him but I absolutely believed I was going to be going to sleep and that I was going to be in hospital for days… so off he went… reluctantly.

When we thought the induction was going to take 3 days…

By 10pm I was starting to feel quite a lot of pain. The midwife came to check on me and said I was only 1cm dilated and since my contractions were irregular and varied in intensity there really wasn’t anything going on yet but if I was really struggling she would give me shot of a strong painkiller called pethidine that was very likely to make me sleepy. It seemed like a great idea so I agreed to it.

In the meantime my very good friend, D, who is practically my sister and who had driven us to the hospital, texted me to ask if I was alright. I said I wasn’t really. So she said she’d come by and sit with me for a couple of hours. She arrived at around 11 and was surprised by how much pain I was in and that the pethidine was barely even taking the edge off.

At this stage the midwife brought me some ethanox, which is a combination of gas and air you breathe in that helps with contractions and to regulate your breathing. She was still adamant that my irregular contractions meant nothing important was happening so she decided not to examine me but said I should let her know if there was any blood. Not long after there was quite a lot of blood so she told me to stand up so she could check if I had lost the mucus plug that keeps the cervix closed. Literally the second I got off my bed my waters more or less exploded. The midwife then decided that she better have a quick check and I was already 6cm dilated even though I still didn’t have regular contractions. I was extremely excited since she had promised me I could have an epidural if I got to 3cm. All through this D kept me calm and played me the birth playlist I had made, which is probably the only reason I didn’t have a nervous breakdown. She also called Mr O since the midwives were starting to panic that he wasn’t actually going to make it in time.

When Mr O arrived at about 1am, I had gone through to the delivery room, I was already 10cm dilated and I was ready to push. The promised epidural had not arrived because things had gone so fast but I was still very excited about the idea that it would be coming shortly. Both midwives who had come to deliver the baby were adamant that I could do it without. I was less convinced, but with the contractions coming thick and fast in the end there genuinely wasn’t time.

Little O was born at 4.19am on Monday morning after only 3 hours of active labour (although it felt a bit like 4 days to me) weighing 3.2kg (7lbs 1 ounce) and 52cm (20 inches) in length. The last bit took a little longer than the midwives were expecting because a certain cheeky monkey decided to keep his hand next to his face for his exit, which made it that much harder to get his head out. The last hour and a half was only possible because I had two such incredible birth partners. Although none of us had actually planned for D to be there for the birth it turned out to be exactly the right thing and she and Mr O were both an incredible support for each other and for me. And in the end I was very happy that I didn’t have the epidural because it meant that I was up and about almost immediately after Little O came out.

I know it sounds like one of those cheesy things you hear in the movies but the minute they gave him to me and I held his little body to my chest I forgot every second of the pain I had been through as well as all the emotional turmoil I experienced in my pregnancy. All I knew was that he was perfect and that I loved him more than I thought it was possible to love anything. 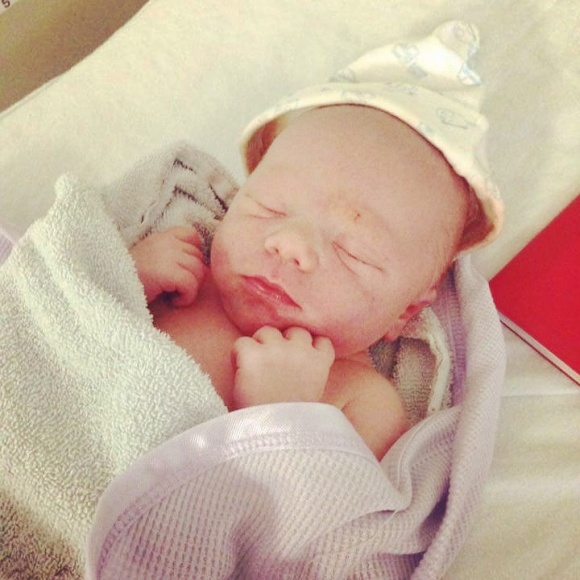 Although my labour was very straightforward and I felt well pretty much immediately after Little O’s birth, we stayed in hospital another two nights. He needed to have his blood sugar checked over a 48 hour period to make sure my diabetes hadn’t made him hypoglycaemic. Although my gestational diabetes was well controlled there was some risk because my active labour was so quick that they only managed to test my blood sugar once, rather than hourly. On that one test it was very high, which is common in labour. They were supposed to put me on a drip to manage it but there literally just wasn’t time.

Exhausted but sleeping means that I can’t stare at him

Fortunately Little O passed all his sugars because he was feeding well and I was able to give him some of the colostrum I had expressed. While the hospital care we received, particularly from the midwives was absolutely amazing we were super excited to go home because sharing a ward with four other little families was a bit tough. Some of them were lovely. Some of them were not. And it all became quite claustrophobic quite fast.

We are home now and doing very well. Mr O and I are stupidly in love with Little O and he is honestly the most chilled baby… well so far anyway.