Rydal (Oscar Isaac), an American who works as a tour guide and panhandler in Athens, finds himself drawn to couple, Chester (Viggo Mortensen) and Colette (Kirsten Dunst). Colette is beautiful and charming and Chester reminds him of his recently deceased estranged father so he spends an evening entertaining them using his superior knowledge of Athenian restaurants and bars. When he returns to his hotel to give Colette back the bracelet she has left in their cab he inadvertently assists Chester in committing a sinister act.This ties the three new companions together as Rydal attempts to help them escape Athens before the authorities catch up with them. As the extent of Chester’s criminal activities becomes apparent the story gets twistier and twistier, Rydal gets in deeper and realises that Colette is not as innocent as she seems.While I found myself drawn into this somewhat mysterious tale I did constantly find myself with nagging questions. I could see that Rydal  was trying to skim money off Chester but the level of danger he was willing to put himself in for a total stranger seemed unwarranted. I also thought that his attraction to Colette was undercooked along with his backstory. I don’t feel like this was the fault of the actors who all give strong performances but more the writing. A perfectly acceptable film to while a weekday evening with but it’s not likely you’ll remember it in a month from now. 3/5 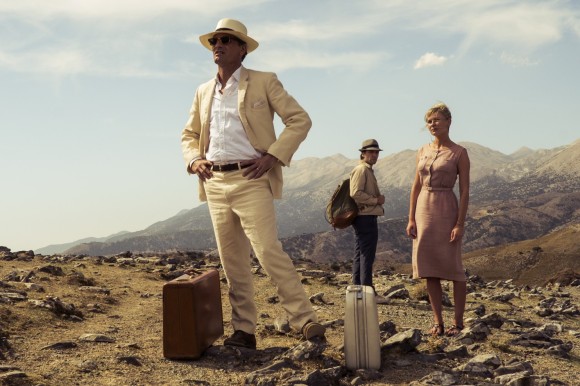 Everybody, come and see how good I look!

Convinced that life on the farm is getting a bit boring, Shaun and his fuzzy friends create and elaborate plan to keep the farmer in bed and have a day off to themselves. Unfortunately the plan goes awry and the farmer ends up trapped in the big city with amnesia living a new life as a highly sought after hairdresser. Racked with guilt and missing their way of life the sheep head into the city to save him but there is an animal control officer on the prowl who isn’t going to let them get away easily. So I have never actually watched the Shaun the Sheep TV show although I feel like this is something that is likely to change considering my current condition. I had seen the trailer for this and thought that the fact that there is no actual dialogue was kind of fun and interesting plus Aardman is always good value. And this was a lot of fun. The sheep and their particular fish-out-of-water physical comedy are adorable and hilarious and this would be enjoyable for anyone of any age. However, even though the whole film was only 84 minutes long I got a bit tired of it and lost concentration towards the end. It might have been because I was on a train journey after a flight but an hour would have been plenty for me. if you are going to watch something with kids though this is so much better than almost anything Disney. 3/5

Will Proudfoot (Bill Milner) is a member of the Plymouth Brethren, a strict religious sect that allows little outside influence and especially no films or television. Will attends a normal secular school but doesn’t mix much with the other kids. Equally outside the mainstream is Lee Carter (Will Poulter),a tearaway who smokes, bootlegs movies and has almost no supervision other than his teenage brother (Ed Westwick). When the two cross paths and Will accidentally watches First Blood the they form an unlikely friendship that results in them deciding to make their own version of the film where Will will star as the son of Rambow (sic). Unfortunately the course of even true friendship has never run smooth. To avoid the scrutiny of his mother (Jessica Hynes) Will will have to come up with ever more elaborate lies to explain where he’s been and with whom and when exotic French exchange student, Didier (Jules Sitruk) and his entourage get involved Lee starts to feel like he’s losing control of his own project. This is a sweet, touching and very imaginative coming of age story that uses its talented young actors to its best advantage. Although Will and Lee are so different I fell in love with both of them. Will’s naive enthusiasm is infectious and Lee’s tough exterior paired with a heart of gold makes him hard not to love. I also enjoyed Will’s mother’s story line as a woman struggling to manage two children and her ailing mother after the death of her husband while also questioning her faith. There are places where the story is a bit obvious and predictable but I think this is intentional to ensure that it is accessible to younger audiences. Absolutely recommended for the whole family. 4/5

Kids’ movie day sure has changed since the 80s

Rob (Michael Stahl-David) is about to move to Japan so on the night before he leaves his closest friends,  gather to bid him farewell, all of which is being documented by his friend, Hud (T.J. Miller). This also happens to be the night that New York is attacked by some kind of creature that appears to have emerged from the depths of the ocean throwing the city into chaos. As Hud continues to film the group of friends must decide whether they are going to heed the call to evacuate or go back and try and find Beth (Odette Anabel), Rob’s sometime lover who is trapped in her apartment, risking all their lives in the process. Cloverfield was one of the first films in the found footage genre and is presented as a tape recovered by the military following the New York attack. At the time I think it was revolutionary and seeing this kind of monster-disaster narrative played out from the perspective of ordinary people, demonstrating their fear, horror and claustrophobia was an absolute novelty. This probably drew a lot more interest than it might have done if released now. Overall it does a great job of capturing what it might be like to be trapped in a disaster situation and there is just about enough character development to make you sort of care a little about what happens to Rob and his friends but at the same time it falls down for exactly the reason that most found footage films do. When things get really intense it is very hard to believe that Hud wouldn’t put down the camera and get on with it for no other reason that to have both his hands free. 3/5