Patrick Kenzie (Casey Affleck) and his girlfriend, Angie (Michelle Monaghan) are Boston private investigators who specialise in finding people who don’t want to be found. Having grown up in the “neighbourhood” Patrick is able to use his local knowledge and relationships to get him into places where the police aren’t normally welcome and to get information that people wouldn’t normally share with the police. When the two are engaged to “assist” the police in tracking down a child who has been kidnapped, they’re out of their comfort zone but Patrick feels compelled to help. This will plunge him into a dangerous labyrinth of crooked cops, drug dealers and addicts, twisted motivations and moral questions that will shake the very foundations of his belief system. Once again the Affleck brothers (this is directed by Ben Affleck) are drawn into telling stories of the Boston underclass and very successfully so. Casey Affleck plays Patrick with a raw vigour that brings across not only his tough side but also his vulnerability making him a character that it is easy to take interest in. He is able supported by Amy Ryan, Titus Welliver and Amy Madigan who play missing Amanda’s shady family, as well as an on form Ed Harris playing a detective who is not quite what he seems. Ultimately this is a study in what is morally right versus what is legally right and where we draw our own personal lines to decide what we can and cannot live with. A cracker of a watch that will put you on the edge of the seat and leave you thinking long after the credits have rolled. 4/5

High school senior, Bianca (Mae Whitman) has been friends with Jess (Skyler Samuels) and  Casey (Bianca A. Santos) her whole life… that is until her childhood friend and now-uber jock, Wesley (Robbie Amell) tells her that she is their DUFF. DUFF stands for “designated ugly fat friend” and doesn’t actually have to refer to someone who is fat or ugly but just less attractive than their friends and therefore more approachable. Realising that her friendship group is built on a sham Bianca engages Wesley to un-DUFF her and help her win the affections of her crush, Toby (Nick Eversham). [SOME VERY OBVIOUS SPOILERS] Along the way there will be the inevitable physical and emotional makeover before Bianca makes the realisation that only being yourself and how you see yourself actually counts. I think maybe I expected a bit too much from The DUFF. I thought it might be a bit of a breath of fresh air from the She’s All That style makeover movies from my teens. In a way it is, Bianca doesn’t turn into a beauty queen after she is made over but really just a better groomed version of her averagely attractive self. But the underlying essence is still much the same, just with more viral videos and social networks. I think maybe I also struggle to identify with this kind of movie since I went to a uniformed all girls’ high school and while I can’t pretend we were nice to each other all the time the kind of looks and clothes based bullying these movies depict just wasn’t a big deal. Not the worst teen movie I have seen in recent years but still nothing special. 2.5/5

After graduating top of his class from law school, Mitch McDeere (Tom Cruise) is inundated with offers from law firms but he can’t resist the almost too good to be true Bendini, Lambert and Locke despite his wife Abby’s (Jeanne Tripplehorn) reservations. Soon after the two move to their new home in Memphis Mitch discovers that “The Firm” expects to control rather more of his life than he is immediately comfortable with. After two of the partners die in seemingly suspicious circumstances and Mitch is approached by an FBI agent (Ed Harris) he realises that Bendini, Lambert and Locke’s biggest client is actually the Mafia and he and his wife have become trapped between two powerful forces, neither of which is going to let them leave quietly. Now it will take all of Mitch’s ingenuity to find a way to get his life back without losing it in the process. In between all of this there’s a tragic past, a convict brother, a sneaky affair, Holly Hunter and some mail fraud and that’s just a very simple description of a very, long and twisty film that I probably shouldn’t have watched while trying to recover from my recent stomach bug. While Cruise is pretty good playing the type of role that made him famous and the supporting cast is more than able, this kind of legal/political intrigue isn’t really my bag and I got kind of bored. It’s all just very John Grisham, which is to be expected since he wrote the novel this is based on, and very late eighties/early nineties. If that is your kind of thing you’ll probably love this but if it’s not and you spent the previous night puking you might be underwhelmed. 3/5 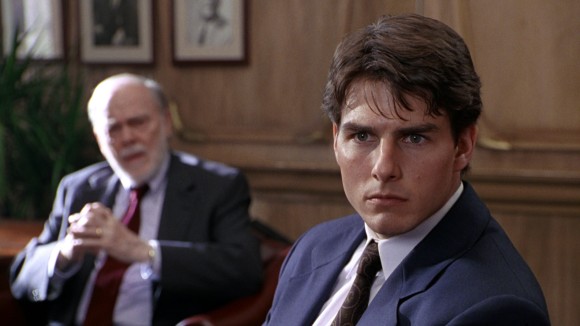 Mitch had just discovered how sausage rolls are really made

After the death of his alcoholic mother and the rejection of his biological father (Josh Lucas), rebellious Stet (Garrett Wareing) finds himself shipped off to a prestigious all boys choir school. Here he is a complete fish out of water amongst his highly trained and well-off classmates but with a raw talent which is immediately recognised by his teacher, Master Carvelle (Dustin Hoffman). Will Stet be able to learn to control his temper and harness his talent before he beats the shit out of his smug rival, Devon (Joe West) or his voice breaks? Who the fuck cares to be honest. While the adult cast of this film sounds impressive on paper including Debra Winger, Eddie Izzard and Kevin McHale they’re all barely phoning it in and the child cast has definitely been chosen more for their ability to sing than act. Wareing is so awful you kind of hope that he’s going to fall in a hole ten minutes in and no one is helped by a script so flat it makes The Netherlands look like The Pyrenees. Also I am not sure if my flatmate and I are just completely uncultured but a lot of the supposedly beautiful singing sounded like cats in a blender to us. No wonder this went straight to DVD/Netflix. Bleh. 0/5