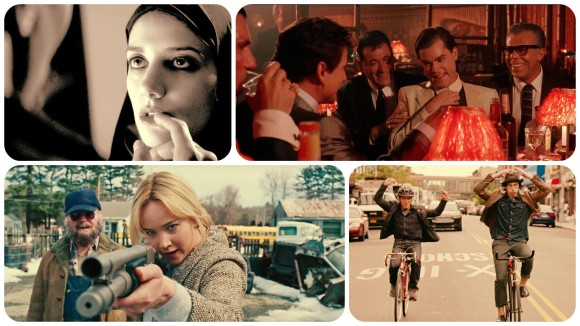 Since she was a young girl, Joy (Jennifer Lawrence) has made and invented things and been told by her grandmother, Mimi (Diane Ladd) that she was destined for greatness. Unfortunately the divorce of her somewhat unhinged parents, Rudy (Robert De Niro) and Terry (Virginia Madsen) and an unwise marriage to a Venezuelan musician (Edgar Ramirez) leaves her with two small children and few prospects. That is until she cuts her hands while wringing out a mop and comes up with an idea for a revolutionary, self-wringing miracle mop. But the road to business success is not a smooth one  and Joy finds herself coming up against obstacles at every turn, ones that would stop a lesser woman right in her tracks. I’ve read a fair few negative reviews for Joy and I can see what people are getting at. The script is pretty uninspired and often leaves members of its talented cast, especially Bradley Cooper as a home shopping network exec and Isabella Rosselini as Rudy’s wealthy girlfriend, at loose ends. Director, David O. Russell also introduces some interesting topics, like Terry’s relationship with a Haitian plumber and the family’s obsession with soap operas but never really pushes them to any sensible conclusion leaving the film somewhat confused in tone. All of that said, Joy is a great character, played with charm, maturity and vulnerability by Lawrence and De Niro is a riot as the completely self-indulgent Rudy. While this is far from Russell’s best, I still had fun. 3/5

In the Iranian town of Bad City, populated by drug dealers, junkies, hookers and degenerates two lost souls are on the prowl. First is Arash (Arash Marandi) ,a gardener who has saved all his money to buy a particularly flashy car… one he is about to lose due to his father’s drug debts . Second is an unnamed girl (Sheila Vand), who has some pretty dark appetites that she’s willing to do almost anything to satisfy. When the girl’s actions lead to a change in fortunes for Arash, the two cross paths and an instant and intense connection is formed, one that neither of them really understands. The further way you get from the boundaries of the traditional Western cinema most of us are used to, the more interesting things get. And A Girl Walks Home Alone at Night is certainly an interesting film, rich in symbolism… a lot of which I feel like I would have liked to have sat with writer-director, Ana Lily Amirpour to fully understand. There’s the fact that its shot in atmospheric black and white, the pulsing electro soundtrack, the girl’s occasional donning of a hijab and Arash’s resemblance to James Dean to consider.And then there’s the lawlessness of Bad City and the way it seems to operate under its own established rules and classes. I suppose ultimately it’s a study in the clash between old and new world, between traditional and modern, rich and poor and the fall out that happens when different worlds collide… or something. Anyway it looks amazing, sounds cool and probably needs to be watched multiple times, by people smarter than me. 4/5

Since he was a young boy all Henry Hill (Ray Liotta) has ever wanted to be is a “wiseguy”. He sees the respect, money and power the neighbourhood gangsters have and sees this as the dream life he was destined for, despite the disgust of his family. He starts out running small errands for top boss, Paul Cicero (Paul Sorvino) but soon moves up the ranks becoming more and more enmeshed in the glamorous but often brutal world of the Italian mob.  He believes in the ethics, strict rules and loyalty that come with being part of the organisation and thinks of himself as untouchable but when things go wrong he finds himself out in the cold with potentially lethal consequences. I have seen a fair few mob movies in my life but I have to say that nothing quite tops Scorcese’s 1990 masterpiece. From the epic performances from an ensemble cast that also includes Robert De Niro, Joe Pesci and Lorraine Braco, to the blistering dialogue, the perfectly measured blasts of violence and the gripping story line everything falls perfectly into place. I also loved that it has that little signature element of surrealism around Harry dipping into his own stash. All that I am left wondering is why Goodfellas wasn’t the career launchpad it could have been for Liotta because he gives the performance of a lifetime. An absolute must-see. 5/5

Filmmaker, Josh (Ben Stiller) and his producer wife, Cornelia (Naomi Watts) are a 40 something childless couple who live in New York. Josh has been working on a documentary for 8 years having lost his way and his inspiration somewhat. At the same time both are struggling to connect with their friends who have started to have children and they’re feeling disconnected from each other. But when they meet a young couple things start to change. Buoyed up by Jamie (Adam Driver) and Derby’s (Amanda Seyfried) enthusiasm and passion for life both Josh and Cornelia start to reinvent and rediscover themselves and each other. They find themselves drawn into a documentary that Jamie is making and start to share their expertise and their contacts but as time goes on Josh starts to wonder if Jamie and Darby are really everything they appear to be on the surface. I’m right between the ages of the two generations depicted in this film but I definitely found myself identifying more with Josh and Cornelia… up to a point. Jamie and Darby immediately seemed disingenuous to me in their motivations and I wasn’t particularly surprised when I was proved right. Overall this is a relatively enjoyable if forgettable film which doesn’t live up to some of Noah Baumbach’s earlier releases but probably worth watching just for Driver who is most definitely a star on the rise. 2.5/5 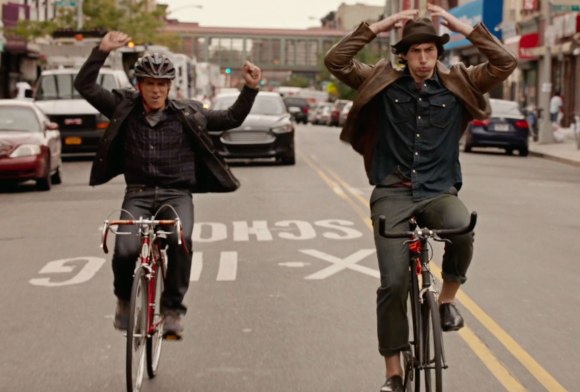