Since coconut oil became the new big thing in both cooking and health I have been quite keen to try it out for cooking and baking. The one thing that has put me off though is the exorbitant price of a jar in my local supermarket or heath shop. However last week I discovered that the ethnic food section of my local Sainsbury’s now sells coconut oil for £2 a jar. This particular aisle in Sainsbury’s has been one of my top finds. It sells tinned tomatoes that are inexplicably cheaper than the Basics range along with super cheap pulses like chickpeas. With that in mind I bought a jar and used it for this recipe with great results. If your super market doesn’t have a cheap ethnic food aisle and you don’t want to shell out for pricey ingredients you can definitely substitute the coconut oil in these tasty but healthy cookies with melted butter. 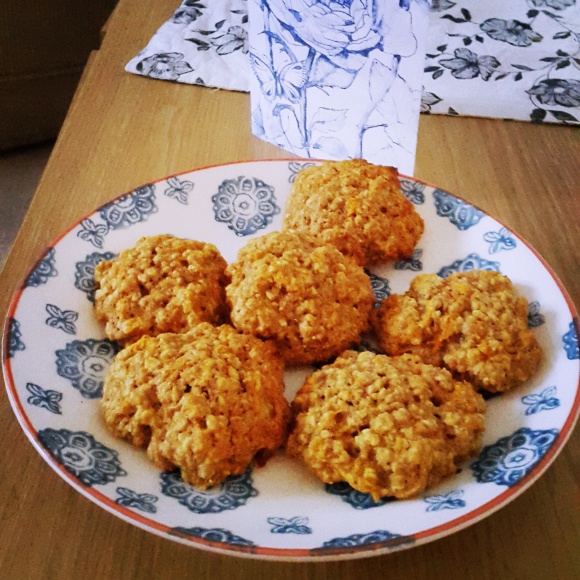 Preheat your oven to 160 C (150 C for a fan oven) and line a baking sheet with greaseproof paper.

In a large bowl stir together the oats, flour baking powder, cinnamon, ginger and salt.

In a separate bowl whisk together the egg, coconut oil, vanilla extract and honey.

Add the wet ingredients to the try and stir until just mixed. Fold in the carrot.

Scoop the batter onto the baking sheet in 15 equal sized balls, Press the balls down lightly. They won’t spread much so you can put them relatively close together.

Bake for 15 minutes in the centre of the oven. Once baked allow to cool for 15 minutes on the baking sheet before transferring to a rack to cool completely.