This latest Disney/Pixar outing takes us on an journey into the mind of eleven year old Riley (voiced by Kaitlyn Dias) whose actions are controlled by her five core emotions – Joy (voiced by Amy Poehler), Sadness (voiced by Phyllis Smith), Disgust (voiced by Mindy Kaling), Fear (voiced by Bill Hader) and Anger (voiced by Lewis Black). For the most part Riley’s life has been filled with joy who generally takes charge of her emotional state but when her family relocates from Minnesota to San Francisco Sadness starts to play a bigger role, one that Joy isn’t particularly pleased with. When Sadness and Joy end up trapped together outside of Riley’s emotional headquarters they must do whatever they can to get back before Riley’s core personality is damaged by just having Anger, Fear and Disgust to guide her. As most of you will know I am not a big fan of Disney/Par but I have to say that this was one of the most imaginative concepts I have seen from them. Their representation of the complexities of the human mind was fascinating as well as being packed with some really fun and funny ideas. I absolutely loved the Train of Thought. The voice casting was also outstanding and I particularly loved The Office favourite, Phyllis Smith as the depressing and adorable sadness and Richard Kind as Riley’s long lost imaginary friend. Bing Bong. Essentially this is a story about growing up and learning that life is all about balance and that all feelings are necessary. I’m not sure how relatable this is going to be for small children but there are enough bright colours and slapstick humour to keep them amused. Well worth a watch. 3.5/5 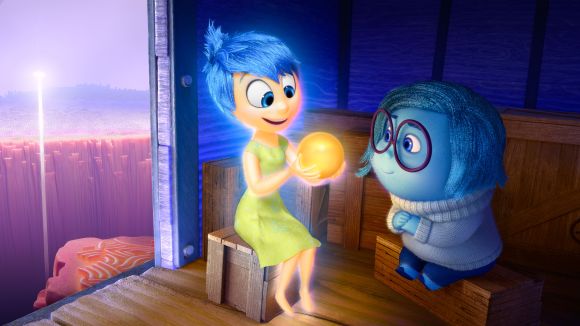 It’s a dragon testicle, I stole it from the cast of Game of Thrones

Jake Gyllenhaal plays Billy Hope a boxer who grew up in the New York foster care system alongside his wife, Maureen (Rachel McAdams). The key element of Billy’s arsenal in the ring is his anger. The more he gets hit, the angrier he gets and when the red mist descends he is both terrifying and unbeatable. When his rivalry with fellow boxer, Miguel Escobar (Miguel Gomez) leads to Maureen’s tragic death Billy goes completely off the rails leaving him banned from boxing, broke, homeless and with his daughter, Leila (Oona Laurence) in the care of Child Protective Services. Without Maureen as his moral compass and the person who made all the family decisions he feels hopeless but when he’s offered a chance at fighting Escobar he realises this could be his chance to completely turn his life around. Working with trainer, Tick Willis (Forrest Whitaker) he’ll have to change his entire way of fighting and in the process find himself again. On the face of it Southpaw seems like a completely by the book underdog sports movie and to some extent it is. There is no point pretending it isn’t relatively predictable. However the performances particularly from a never better, Gyllenhaal and an impressive Laurence are  outstanding and the relationship between Billy and Leila is so touching and heartfelt that it’s impossible not to root for Billy to succeed. As always Whitaker delivers and despite the fact that I am not a big fan of McAdams and she’s not around for very long she makes a big enough impact to really give an insight into Billy’s motivations. I won’t pretend this is a perfect film and I’m not sure why we needed Rita Ora as a junkie hooker but sometimes the oldest stories are the best because they are the most universal. Absolutely recommended. 4.5/5

When an alien race interprets humanity’s broadcast of 80’s video games as a declaration of war they send down a challenge in the form of giant pixelated computer games forcing the military to turn to a motley crew of geeks to save the earth. I only went to see Pixels because there was a pre-screening as part of my local cinema’s Unlimited club. I was expecting it to be the worst film I have ever seen based on the reviews. To be honest most of the plot doesn’t make much sense. Adam Sandler and Kevin James are both not funny in the least, particularly Sandler who seems to be wishing for his own death throughout. I think pretty much anyone would have been more believable as the President of the USA than James, even though he is playing a version of the President who can barely read. I would have gone with 50 Cent as the President over James. It’s about as believable as Michelle Monaghan falling for Adam Sandler… oh… wait… On the other hand both Josh Gad and Peter Dinklage who play the remaining geeks are absolutely hilarious and there were moments where I actually laughed out loud and for the most part I was quite entertained. I’m not recommending this film to anyone but it’s certainly not the worst film I have ever seen and if you do somehow end up watching it I think you’ll at least have more fun than poor old Adam Sandler. 2/5

They see me rolling…

This documentary looks at the insidious way in which the US food industry has contributed to rising obesity rates exploring how clinical studies have been suppressed and manipulated, the push toward focusing on activity levels over food, the part that marketing plays, how the food industry is in league with the diet industry and the fact that if nothing changes it will soon be too late to turn things around. While the UK is not as bad as what is happening in the US I found a lot of things very familiar and I could identify with the confusion over what healthy food actually is (hint: it;s anything that isn’t processed or full of chemicals), the suggestion that cranking up your activity levels is the answer to weight loss and the perception that overweight people are just lazy. If you are in any way concerned about your health I would highly recommend watching this as it’s a real eye opener without ever being preachy. The information is also presented in an interesting way with the right balance of science and drama. Now go and eat your veg! 4/5

Jill was beginning to regret eating that block of lard