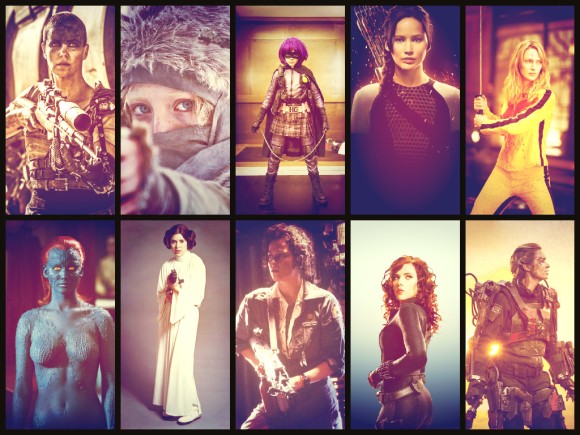 There  are loads of roles out there for male characters that are seriously kick ass – from Bond (*vom*) to Indiana Jones, Luke Skywalker and about 40 different superheroes tough male characters with serious fighting skills are dime a dozen. The same cannot be said for female characters. For some reason Hollywood seems to think we don’t want to see chicks kick ass (we do). So in the hope of inspiring all the big time producers who obviously read this blog I am bringing you a list my my favourite kick ass chicks. For the purposes of this list I am specifically featuring characters who physically kick ass.

Mindy Macready AKA Hit-Girl
Films: Kick-Ass (2010), Kick-Ass 2 (2013)
Played by: Chloe Grace Moretz
Special skills: Martial arts, beating down grown men twice her size
Ass kicking power: 8/10
“Dave Lizewski: How do I get a hold of you?
Hit Girl: [sarcastically] You just contact the mayor’s office. He has a special signal he shines in the sky; it’s in the shape of a giant cock.”

Imperator Furiosa
Film: Mad Max: Fury Road (2015)
Played by: Charlize Theron
Special skills: Driving, fighting one handed
Ass kicking power: 9/10
“Imperator Furiosa: How are you?
The Splendid Angharad: It hurts.
Imperator Furiosa: Out here, everything hurts. You wanna get through this? Do as I say. Now pick up what you can and run.”

Ripley
Films: Alien (1979), Aliens (1986), Alien³ (1992), Alien: Resurrection (1997)
Played by; Sigourney Weaver
Special skills: Survival, resourcefulness
Ass kicking power: 8/10
“Ripley: [pointing to part of gun Hicks is showing her] What’s this?
Hicks: That’s the grenade launcher. I don’t think you want to mess with that.
Ripley: You started this. Show me everything. I can handle myself.
Hicks: [chuckles] Yeah, I noticed.”

Beatrix Kiddo AKA The Bride
Films: Kill Bill vol 1 (2003), Kill Bill vol 2 (2004)
Played by: Uma Thurman
Special skills: Samurai sword
Ass kicking power: 10/10
“The Bride: [in Japanese] Those of you lucky enough to have your lives, take them with you. However, leave the limbs you’ve lost. They belong to me now.
[in English]
The Bride: Except you, Sofie! You stay right where you are!”

Raven Darkholme AKA Mystique
Films: X-Men (2000), X-Men 2 (2003), X-Men: The Last Stand (2006), X-Men: First Class (2011), X-Men: Days of Future Past (2014)
Played by:  Jennifer Lawrence/Rebecca Romijn
Special skills: Assuming the identities of others
Ass kicking power: 9/10
“Nightcrawler: Excuse me? They say you can imitate anybody, even their voice.
Mystique: [as Nightcrawler] Even their voice.
Nightcrawler: Then why not stay in disguise all the time? You know, look like everyone else.
Mystique: Because we shouldn’t have to.”