The Avengers come together recover Loki’s sceptre from Hydra and discover it is contains a gem of infinite power. While Thor (Chris Hemsworth) wants to return it to Asgard, Tony Stark (Robert Downey Jr) sees it as an opportunity to activate his Ultron (voiced by James Spader) AI, which is designed to protect the Earth from future alien attack. Stark ropes in a reluctant Bruce Banner (Mark Ruffalo) and sets up the transfer without telling the other Avengers. Unfortunately when Ultron surfaces, he decides that the only way he can achieve his mission of peace is by destroying not only The Avengers but the whole world. Awkward. In between all this Bruce Banner is angsting over being a naughty Hulk and the potential of a relationship with Black Widow (Scarlett Johansson), Hawkeye (Jeremy Renner) is revealing untold depths and Captain America (Chris Evans) is finally learning to let the past go. Oh and there are a pair of twins (Aaron Taylor-Johnson and Elizabeth Olsen) who were experimented on by Hydra running around helping Ultron with their crazy super powers. So basically there is loads going on here including a lot of loud noises, explosions and banter and it’s all really fun and very pretty to look at. It’s also formulaic, overly complicated and Ultron’s ultimate plan is kind of ridiculous. If you go in expecting a good popcorn movie with snappy dialogue, fast action sequences and just enough character development to keep your brain engaged, you’ll get exactly the summer blockbuster you’re looking for with great performances particularly from Ruffalo, Renner, Johansson and Olsen (who is a badass).  3.5/5

Blah blah blah… just give me control of the world already

Orphan Bathsheba Everdeen’s (Carey Mulligan) life changes forever when her uncle leaves her his farm. She employs her former neighbour Gabriel Oak (Matthias Schoenaerts) , a shepherd who proposed to her before he became destitute when all his sheep ran off a cliff, rolls up her sleeves and gets stuck into farming life. It’s not long before Bathsheba’s new neighbour, William Boldwood (Michael Sheen) realises she’s  a bit of a hotty and proposes to he too. So many neighbours, so little time. Unfortunately for both men Bathsheba is all about independence so turns them down. Then she meets a soldier (Tom Sturridge)  in the woods in the middle of the night, becomes moist at the sight of his moustache, marries him instead.and it all goes horribly tits up. There are some really good things about Far From the Madding Crowd – it looks absolutely gorgeous, Mulligan and Schoenaerts have excellent chemistry and its a period drama that doesn’t have Keira Knightley in it. And then there are the valuable life lessons it teaches you: sheep are more trouble than they’re worth, don’t marry the first man who fingers you in the bushes, if they tell you your husband is dead ask to see the body and if your last name is Robbin it’s a bad idea to name your daughter Fanny. On the other hand it goes on forever and being based on a Thomas Hardy novel, it pretends to be about a free-spirited, strong-minded woman but is actually rife with misogyny. Only for those who are obsessed with the British countryside in Victorian times. 1.5/5 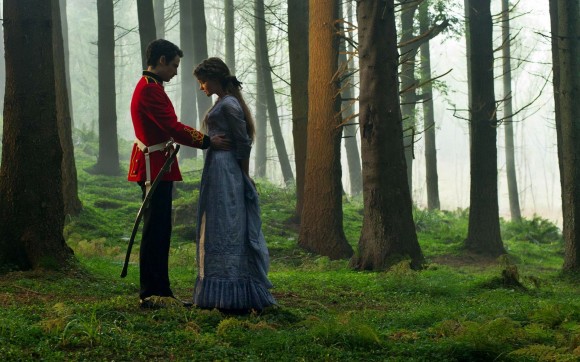 This critically acclaimed documentary looks at death of Seaworld trainer, Dawn Branchea, at the hands (fins?) of a killer whale named Tilikum and how behaviour within the marine theme park industry lead to the tragedy. It explores the psychology and intelligence of marine mammals and their family groups, looking at how the barbaric practice of keeping them in captivity and training them to perform damages their emotional state. At the same time it also delves into how Seaworld’s particular practices around training methods, known dangers and a focus on profit contributed to an accident that seems more and more inevitable as the evidence unfolds. For me a good documentary has to be thought-provoking, teach me something new and have enough drama to tell a story that is more than the sum of the facts. Blackfish ticks every one of those boxes. The inclusion of interviews with former Seaworld trainers really adds authenticity in the absence of any comment from Seaworld itself, as does the heartbreaking testimony of the family and friends of trainers who fell victim to the frustration of animals pushed to the edge of their tolerance, Highly recommended. 4/5 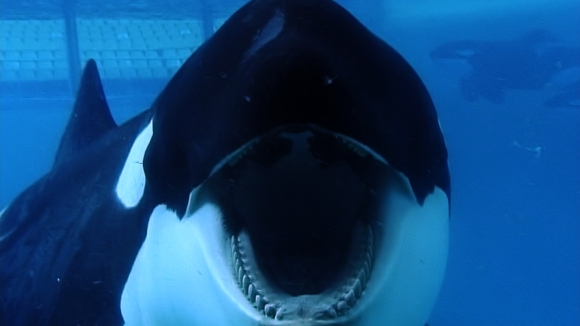 Bitch you come one step closer and I am going to bite the SHIT out of you!

Marion Cotillard plays Sandra, a young Belgian mother who has taken time off work due to depression and what appears to be an anxiety disorder. In her absence management has realised that they can do the job with one less employee and has given the remaining staff the choice between allowing Sandra to come back to work or receiving a €1,000 bonus. Unsurprisingly the team votes for the bonus but when it comes to light that the foreman may have suggested that someone was going to be made redundant regardless, Sandra’s manager agrees to a re-vote. This gives Sandra two days and one night to convince her fellow employees to vote for her to come back. Cotillard gives an excellent performance  as the fragile Sandra who constantly has to fight her instinct to just give up and go to ground despite the fact that she knows in her heart of heats going  back to work is the best possible thing she could do. I also thought Fabrizio Rongione was great as her husband – torn between wanting to support the woman he loves and wondering whether he has lost her forever. And it’s just as interesting seeing the variety of reactions from her colleagues when she approaches them from relief at getting to change a decision they regret to outright aggression. I did think the idea of putting the decision of another staff member’s redundancy in the hands of employees seemed very strange as an employment practice but if you can get past that this is definitely worth a watch. 3.5/5 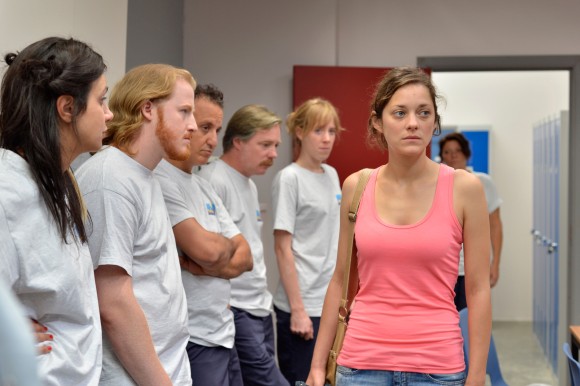 Why did no one tell me it was white shirt day?