Having grown up in a large country with vast interior and a very limited public transport system, the road trip was a mainstay of my life from when I was very small. My grandparents lived at the seaside ten hours drive from my home town Johannesburg, which meant the whole family made the trip by car at least once a year. I applaud my parents for doing this since a car journey of that length (especially in our Renault 5 in the 80’s – a car no larger than a Fiat Punto) can’t have been that much fun with two kids under five. When I got older I went on numerous holidays with friends that involved a road trip on the way there and on the way back. Even now although I don’t drive myself, the idea of hopping into a car and heading out into the open road is something that fills me with a little frisson of excitement. I don’t think I am the only one since the road trip movie is a bit of a Hollywood staple. Here are some that I love.

Starring: Susan Sarandon, Geena Davis, Harvey Keitel
The journey: From Oklahoma to Mexico
The purpose: To get away from their boring lives… and Thelma’s awful husband.
The vehicle: A 1966 Ford Thunderbird
“Thelma: Driiive Louise! Drive! Drive the car! Go! Go! Go go go go go go!
Louise: What is it? What happened?
[Thelma holds up money]
Louise: You robbed the store? You robbed the whole damn store?
Thelma: Well we needed the money.
Louise: Oh shoot!
Thelma: It’s not like I killed anybody for God’s sake!
Louise: Thelma!
Thelma: I’m sorry, we needed the money, now we got it.
Louise: Oh shoot! Oh shoot, Thelma!
Thelma: Louise, get us to damn Mexico.
Louise: Allright, oh shoot! Oh shoot! Oh shoot!”

Starring: Josh Zuckerman, Clark Duke, Amanda Crew
The journey: From Chicago to Knoxville
The purpose: For virgin, Ian, to meet up with a girl he met online and hopefully pop his cherry
The vehicle: A 1969 Pontiac GTO Judge “borrowed” from Ian’s brother, Rex
“Lance: Dude, what the fuck?
Ian: I don’t want her along.
Lance: Oh, really? You don’t want to bring Yoko on your sex trip? Yeah, no shit. She’s always cock-blocking you.
Ian: No, she isn’t. She doesn’t even have a…
Lance: Okay, twat blocking. Professor.” 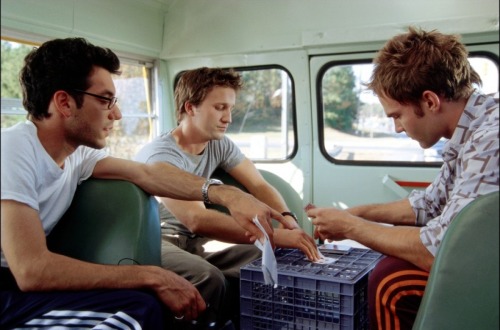 Starring: Breckin Meyer, Seann William Scott, Amy Smart
The journey: From New York to Austin
The purpose: For Josh to retrieve a sex tape he inadvertently made with Beth and than accidentally posted to his girlfriend, Tiffany.
The vehicle: A borrowed car followed by a stolen bus for blind school children
“Rubin: I just said we’d make it across. I didn’t say anything about the wheels staying on.
Josh: What the hell are we gonna do now? I’m totally screwed! I don’t have time to be walking through the woods right now!”

The Adventures of Priscilla Queen of the Desert (1994)

Starring: Hugo Weaving, Guy Pearce, Terence Stamp
The journey: From Sydney to Alice Springs
The purpose: to perform in a show and for Anthony ‘Tick’ Belrose to be reunited with his son
The vehicle: A battered tour bus
” Felicia: [in sweet voice] Mummy, maybe a trip to the outback will help me get over this little… phase I’m going through. And you never know, I might meet some lovely country girl.
[in tough voice]
Felicia: I hereby christen this budget Barbie camper… Priscilla. Queen of the Desert!
[smashes champagne bottle against bus]
Bernadette: That’s gotta be the understatement of the century.”

Starring: Sam Riley, Garrett Hedlund, Kristen Stewart
The journey: From New York to California
The purpose: For the sheer joy of being on the road
The vehicle: A car… but I have no idea what kind.
“Sal Paradise: The only people for me are the mad ones, the ones who are mad to live, mad to talk, mad to be saved, desirous of everything at the same time, the ones who never yawn or say a commonplace thing, but burn, burn, burn like fabulous yellow roman candles exploding like spiders across the stars.”

Starring: Steve Carell, Toni Collette, Greg Kinnear
The journey: From Albuquerque to Redondo Beach
The purpose: To get eight year old Olive to the Little Miss Sunshine Beauty pageant
The vehicle: A bright yellow mini-bus
“Richard: I can’t slow down. I can’t slow down.
Sheryl: Come on, Olive.
Frank: Come on, sweetie, jump. Jump in the car.”

Starring: Elijah Wood, Eugene Hutz, Boris Leskin
The journey: From Odessa to Trachimbrod
The purpose: For a young American Jew to find the woman who helped his family escape the Holocaust
The vehicle: A tiny blue car
“Alex: Please, don’t be scared. Cars are totally safe now. They even have airbags, crumple zones… Maybe not this one… but most!”

Starring: Peter Fonda, Dennis Hopper, Jack Nicholson
The journey: From Los Angeles to New Orleans
The purpose: To experience Mardis Gras and as much of America as possible on the way
The vehicle: Two Harley Davidson Hydra-Glides
“George Hanson: I mean, it’s real hard to be free when you are bought and sold in the marketplace.”