At thirty Chris Kyle (Bradley Cooper) decides to become a Navy SEAL because Murrica and stuff. At around about this time he also meets a woman called Taya (Sienna Miller). She’s not so keen on Navy SEALs nor can she hold her whisky but he talks her into marrying him anyway. During their wedding Chris finds out he has to go to Iraq. Hoorah! It turns out he is super good at shooting people from a distance. So  he does this for about two hours, while Taya gives birth to a series of fake babies and laments the fact that killing loads of people is turning Chris into a bit of a cunt. What makes it even better is that Chris ends up in a kind of reckless game of one upmanship with a silent, character-free Syrian sniper who was in the Olympics and isn’t a big fan of Murrica. Boo! Anyway… I have absolutely zero idea how this got nominated for an Oscar. While Miller and Cooper are both pretty good and the film avoids sinking into pro-American propaganda since every American in it comes off looking like a dick,  it’s  also hopelessly boring. It can’t decide if it wants to be an action movie or a dramatic account of the psychological effects of war on soldiers and so it ends up being a shite example of both. I did learn though that in America it is appropriate not to wear any panties under your sundress in front of your children. Terrible. 1/5 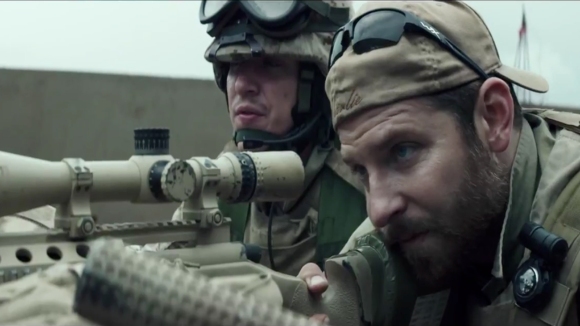 Killing in the name of whaaaat?

Jupiter Jones (Mila Kunis) cleans toilets for living. She also happens to be the genetic reincarnation of the matriarch of the powerful Abrasax (not a magic saxophone unfortunately) family and therefore the rightful owner of the Earth. She finds this out when she is attacked by aliens while trying to sell her eggs under duress from her cousin… as you do. Fortunately anti-gravity boot wearing, half man-half dog Caine Wise (Channing Tatum) is there to rescue her. Yay! It turns out that her former self’s three kids, Titarse (Douglas Booth), Khaliber (Tuppence “isn’t that a euphemism for a vijayjay?” Middleton) and Baldric (Eddie Redmayne) all want to get hold of her in order to further their own interests in the very profitable business of intergalactic DNA restructuring… or something. I realise those are not the actual character names but I couldn’t remember them and I like my versions better. So for two hours everyone chases Jupiter around, she keeps falling off shit and over shit and under shit and Caine keeps coming to her rescue – sometimes aided by and sometimes hindered by his former legion commander, Sparky (Sean Bean), who also has his own agenda. So many agendas!!! Oh and the DNA rebuilding juice is made from harvesting humans (!!) although this is barely touched on. (Soylent green is people!) Anyway Jupiter Ascending looks absolutely amazing but no amount of CGI, prosthetics or impressive world-building can make up for a non-existent storyline, lack of character development and an absolute stinker of a script. Tatum and Kunis do what they can with what they have been given but Redmayne decides to play his character like an aging soap opera actress on crack. I’m not sure what he was thinking but it’s almost so bad it’s good. Almost. It feels like the Wachowskis have taken the very interesting idea of the Universe being a giant corporate machine and pissed it up the wall by focusing on all the wrong things. I can’t believe I put this on my top ten most anticipated movies for 2015. Avoid. 1/5 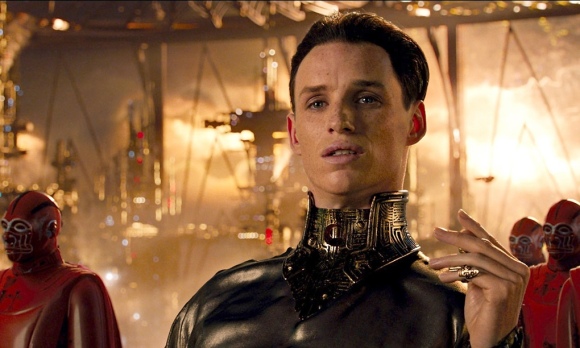 Bring me the blood of a virgin… and a two piece… and a biscuit!

Virginal English literature student, Anastasia Steele (Dakota Johnson) meets billionaire businessman, Christian Grey (Jamie Dornan) while filling in for her roommate, Kate (Eloise Mumford) during an interview. Although Anastasia is intimidated by Christian there immediately a spark between them and it’s not long before he has pushed his way into her life in a rather creepy manner. He then introduces her to his somewhat unusual sexual proclivities insisting the only way they can have a relationship is if Anastasia signs a contract where she will act as his submissive, agreeing to his every whim. There are a couple of positives to this film. It has a great soundtrack and absent of her ludicrous inner-monologue and in the hands of the rather charming Johnson, Anastasia is considerably less annoying than her book incarnation. But you simply cannot polish a turd. The dialogue sticks closely to the wince-inducingly awful source material and the entire premise is off-putting. Christian’s behaviour towards Anastasia is controlling, manipulative and abusive and there is nothing romantic about the way he uses his wealth to distract her from the fact that he is pushing her in a direction she does not want to go in. This film is not about two consenting adults discovering that they have similar sexual tastes and indulging in them but rather about a man withholding his affection from a woman he has seduced unless she submits to being controlled – and I can’t enjoy watching that kind of relationship being presented as the height of romance. I was particularly disappointed by the fact that director, Sam Taylor-Johnson chose not to show Anastasia’s injuries after Christian’s most aggressive beating, lessening the impact of his abuse. Awful. 1/5

For the love of god, Christian. I am trying to sleep. Enough with the Chopsticks!

On their last day of high school best friends, Seth (Jonah Hill) and Evan (Michael Cera) agree to buy the booze for Seth’s crush, Jules’ (Emma Stone) graduation party. If they pull it off they’ll earn the cool points that will enable Seth to get with Jules and Evan to woo, Becca (Martha MacIsaac). They’re underage so they’ll need to rope in their even dorkier frenemy, Fogell (Christopher Mintz-Plasse) who has a new fake ID. The only problem is Fogell’s fake ID claims that he’s a twenty-five year old Hawaiian named McLovin. When Fogell’s attempts to procure the aforementioned alcohol are interrupted by a hold-up, Seth and Evan mistake his interaction with the police for an arrest and do a runner, plunging them into a crazy adventure that will test their friendship to its limits. At the same time, cops Slater (Bill Hader) and Michaels (Seth Rogen) decide to take Fogell under their wing setting him up for a night he will never forget. Superbad is rude, crude, crazy and ultimately hilarious. While Seth and Evan talk big, they’re actually good kids underneath their bravado and it’s easy to identify with them. Hader and Rogen are hilarious as the last two people who should have any responsibility for the law and their life advice to Fogell is brilliant. Of course if you don’t enjoy director, Judd Apatow’s brand of comedy or you find any  of the cast annoying it’s probably not for you but I think it’s one of the best teen comedies made in the last decade. 4/5 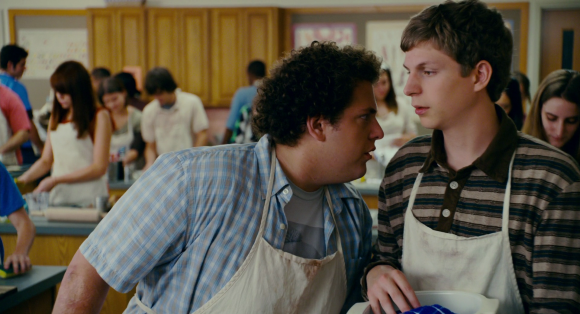 I can smell the desperation!