As 2014 draws to a close I am looking back at the characters that have captivated me this year. Of course as I am based in the UK there will be a series of 2014 releases that don’t drop here until 2015 so there is a chance this list will get an addendum at some point next year but this is where we are so far.

Amy Dunne
Played by: Rosamund Pike
Film: Gone Girl
Why is she awesome: Because she’s absolutely deranged and she’ll stop at nothing to get what she wants no matter how brutal or fucked up it is.
“Amy Dunne: I’m the c*nt you married! The only time you liked yourself was when you were trying to be someone this c*nt might like. I’m not a quitter… I’m that c*nt.”

Frank
Played by: Michael Fassbender
Film: Frank
What makes him awesome?: He’s absolutely mesmerising that you can’t help but get sucked into his weird circle of influence but at the same time he’s complicated and fragile and damaged and probably the most realistic portrayal I’ve seen of mental illness on screen.
“Frank: [singing] Stale beer. Fat fucked, smoked out. Cowpoked. Sequined mountain ladies. I love your wall. Put your arms around me. Fiddly digits, itchy britches. I love you all.”

Gustav H.
Played by: Ralph Fiennes
Film: The Grand Budapest Hotel
What makes him awesome: He’s fabulously charismatic and dignified and at the same time pure filth.
“M. Gustave: Rudeness is merely an expression of fear. People fear they won’t get what they want. The most dreadful and unattractive person only needs to be loved, and they will open up like a flower.”

Groot
Voiced by: Vin Diesel
Film: Guardians of the Galaxy
What makes him awesome: He’s so innocent and loyal and funny and he manages to communicate so much in just one statement.
“Groot: I am Groot.”

Katniss Everdeen
Played by: Jennifer Lawrence
Film: The Hunger Games: Mockingjay – Part 1
What makes her awesome: Katniss will always been one of my favourites. She’s one of the most well-rounded complex female characters we get on screen – strong but vulnerable, brave but damaged, selfish and selfless at the same time, heroic but humble.
“Katniss Everdeen: I have a message for President Snow: You can torture or bombed us, blasted our district to the grounds. But do you see that ? Fire Is Catching… If we burn, you burn with us!”

Lou Bloom
Played by: Jake Gyllenhaal
Film: Nightcrawler
What makes him awesome: He is absolutely terrifying despite being generally softly spoken and his ability to manipulate others is second to none.
“Lou Bloom: What if my problem wasn’t that I don’t understand people but that I don’t like them? What if I was the kind of person who was obliged to hurt you for this? I mean physically. I think you’d have to believe afterward, if you could, that agreeing to participate and then backing out at the critical moment was a mistake. Because that’s what I’m telling you, as clearly as I can.”

Pietro Maximoff/Quicksilver
Played by: Evan Peters
Film: X-Men: Days of Future Past
What makes him awesome: He’s just so fricking cool and his cheeky behaviour towards Professor X and Wolverine steals the whole of DOFP.
“Logan: We need your help, Peter.
Pietro Maximoff: With what?
Logan: Breaking into a highly secured facility and get someone out.
Logan, Pietro Maximoff: Prison break? That’s illegal, you know?
Logan: [Looks around and sees the items Peter has obviously stolen] Only if you get caught.” 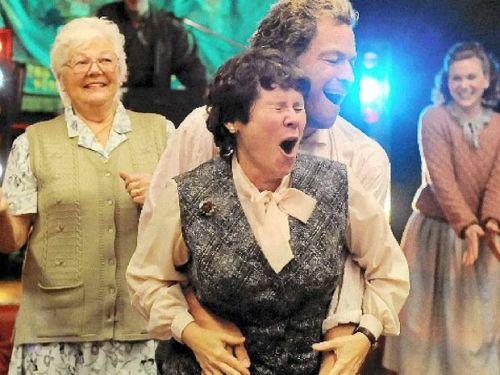 Hefina
Played by: Imelda Stauton
Film: Pride
Why is she awesome: She’s bold, brave and she takes no prisoners plus it’s always fun watching the elderly swear.
“Hefina: “What in the hell do you think you’re doing? Get out there and find a gay or a lesbian right now!”
Guy: “I don’t want to give them the wrong impression.”
Hefina: “Right, cause you’re so bloody irresistible!”

Augustus Waters
Played by: Ansel Elgort
Film: The Fault in Our Stars
What makes him awesome: He’s the guy that we all should have fallen for when we were teenagers, you know instead of the douchebag bad boy who had a motorbike. Plus he’s endlessly positive even in the face of total uncertainty.
“Augustus Waters: I am in love with you. And I know that love is just a shout into the void, and that oblivion is inevitable, and that we’re all doomed. And that one day all our labor will be returned to dust. And I know that the sun will swallow the only earth we will ever have. And I am in love with you.”