After his wife is eaten, clown fish Marlin (voiced by Albert Brooks) vows never to let his son, Nemo (voiced by Alexander Gould) come to any harm. But when Nemo is captured by divers on his first day of school Marlin must overcome his own fear of the unknown and undertake a daring mission to find him. As Nemo attempts to make friends with the somewhat unhinged inhabitants of a tank in a dentist’s office, Nemo takes on sharks, jellyfish, whales and more all accompanied by an amnesiac regal blue tang fish named Dory (voiced by Ellen Degeneres). Finding Nemo is one of my other great exceptions to general dislike of Disney. Maybe it’s the lack of princess love story or maybe it’s my fascination with the ocean but there’s something about this Pixar classic that just gels. The characters are dead on, the dialogue is hilarious and the rich marine setting makes for a spellbindingly beautiful animation experience. While there is a fun story for kids to enjoy some of the humour is definitely aimed at adults, which stops it from becoming too saccharine and the message of learning to take risks and letting your children spread their wings is heartwarming and not too heavy handed. A delight. 5/5

Did you ever get that feeling like there was a shark behind you?

After Kevin McAlister (Macauley Culkin) argues with his large, rambunctious family he wishes they would disappear, which is exactly what happens when they accidentally leave him behind on a Christmas trip to Paris. Initially Kevin is thrilled with his new found freedom but when he realises a pair of burglars are targeting his house and living alone is actually pretty boring, he changes his tune. But not before he has to come up with a daring and ingenious plan to thwart the would-be intruders. There’s no question that Home Alone has some serious charm and Culkin makes up for having virtually no acting talent by being really, really cute… probably the reason his career tanked when he turned twelve. Other things are less good. The whole burglar element is quite weird and the level of violence and threat towards the end is pretty disturbing for a lighthearted kids film. Kevin’s family are also absolutely awful and their behaviour borders on child abuse. I think it might have been better for Kevin if they never came home and he was taken into care instead. Not John Hughes’ best but still good fun if you don’t take it too seriously. 3/5 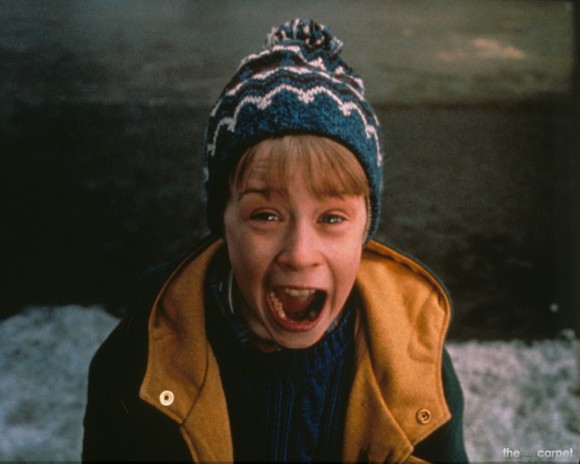 Kevin had seen the future and it wasn’t pretty

Ticket collector, Lucy (Sandra Bullock) has lived a lonely life since her father died, with only her cat and her amorous neighbour for company. When a handsome stranger (Peter Gallagher) is pushed in front of the train tracks, Lucy rushes to save him. He is rushed to the hospital where he falls into a coma but Lucy’s not allowed to see him until she’s mistaken for his fiancee. The confusion continues when Peter’s family arrives and immediately embraces Lucy as one of their own. After so many years of feeling alone, Lucy finds it hard to resist the temptation to go alone with the lie, especially when she finds herself falling for Peter’s brother, Jack (Bill Pullman) but what will happen when Peter wakes  up? The premise of While You Were Sleeping is pretty standard, predictable romcom fare but somehow it really works. Quite possibly it’s because Sandra Bullock is just so charming as Lucy that you can’t help but totally fall for her. Peter’s family is also sweet and hilarious and even for someone like me who doesn’t really do romcoms it’s totally heartwarming and lovely. A bit of a forgotten classic. 3.5/5

After facing a devastating rejection at the hands of his best friend and high school crush, Jamie Palamino (Amy Smart), dorky overweight, Chris Brander (Ryan Reynolds) leaves his home town vowing never to come back. In LA he reinvents himself, losing weight, building a career as a successful music manager and becoming a ferocious womaniser. En route to Paris with his mental client, Samantha James (Anna Faris) Chris’ plane crashes just outside his home town, just before Christmas. Initially Chris can’t wait to leave but when he discovers Jamie is still single he decides to make another play for her. Will Chris make it out of the friendzone? Will his new skillz impress Jamie? And what’s up with the return of Jamie’s other high school suitor Dusty Dinkleman (Chris Klein)? I remember liking this the first time I saw it but on a second viewing it was hard to remember why. The one absolutely vital requirement of a romcom is that you want the couple to end up together but Chris is such a complete penis that it’s hard not to spend the whole film hoping that Jamie, who is actuallly very sweet, manages to escape him. On the plus side Anna Faris is hilarious as the totally self-absorbed Samantha and Chris Marquette is pretty funny as Chris’ younger brother but overall this is ultimately very skippable. 2/5